Riot grrrl is a feminist, punk rock movement that began in the early 1990s.

In the later 2010s and early 2020s, riot grrrl bands such as Bikini Kill took reunion tours that renewed mainstream interest in the movement.

Where does riot grrrl come from? 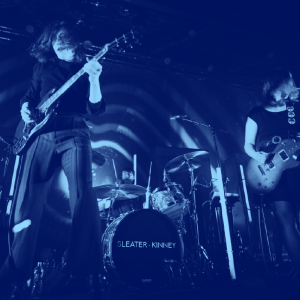 The riot grrrl movement began around 1991 in Olympia, Washington. Feminists and feminist groups organized to encourage their own brand of punk music that would express messages mostly absent from the male-dominated punk rock and grunge music popular in the Pacfic Northwest at the time. This movement was further spurred on by homemade magazines (“zines”) that encouraged women to make music.

The term riot grrrl resulted from the words of Bratmobile member Jen Smith, who wanted the movement to start a “girl riot” of women making music and making an impact in the punk scene. Zines, such as the one made by Bikini Kill, would change “girl riot” into riot grrrl when referring to the emerging movement. The riot, here, in riot grrl suggests an energetic disruption of a patriarchal status quo. The grrrl is an alteration of the word girl meant to sound similar to an animal growl to emphasize that the movement was made of confident, aggressive women.

Unsurprisingly, the riot grrrl movement was not mainstream, and riot grrrl bands mostly released albums or cassettes independently or under local labels. Still, the movement would gain wider attention among (mostly female) fans of punk rock and would influence a lot of music made by mainstream artists such as Alanis Morissette. As is often the case with independent punk scenes, riot grrrl bands usually wouldn’t last long before members would join different bands or begin their own projects.

Some music historians argue that the riot grrrl movement never ended and continues through modern feminist bands such as Pussy Riot. Others say that the movement ended in the mid-to-late 1990s after the riot grrrl message of “girl power” was co-opted by mainstream, very-not-punk bands such as the Spice Girls. Today, both old and new riot grrrl music is much easier to find than it was in the 1990s and is usually categorized under the wider “punk” or “punk rock” genres of music.

Remember when Kim Gordon read the Riot Grrrl Manifesto at that party in Brooklyn?
@letigreworld, February 11, 2012
In “Moxie,” the quiet and reserved Vivian finds inspiration in her mother’s past with the riot grrrl movement and its fusion of feminism and punk-rock.
Andrew Dansby, Houston Chronicle, February 28, 2021

I would literally give my left leg to have been a part of the grunge/riot grrrl scene in 90s Seattle.

This is not meant to be a formal definition of riot grrrl like most terms we define on Dictionary.com, but is rather an informal word summary that hopefully touches upon the key aspects of the meaning and usage of riot grrrl that will help our users expand their word mastery.