Feedback
Side to Side
Sonic.exe

What does slappy mean?

Slappy refers to a fictional evil ventriloquist dummy in the Goosebumps horror franchise.

Where does slappy come from? 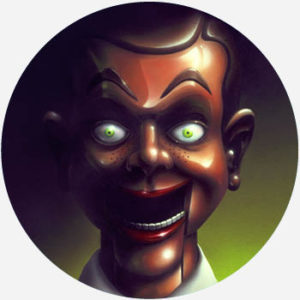 Walt Whitman notably used slappy in his 1855 Leaves of Grass to describe the sound of water on “the slappy shore.” This slappy is based on slap, an onomatopoeic word dating back to the mid-1400s. In the 1930s, slappy was a slang variant of slap-happy, a slightly older colloquialism for “punch-drunk” or “carefree.”

As a character name in fiction, Slappy appeared in 1959 in the children’s book Slappy: The Story of a Little Duck, about a duckling whose webbed feet made a “slip-slap” sound when he walked. In 1993, Goosebumps horror series author R.L. Stine introduced the more familiar fictional Slappy, an evil, gray-suited ventriloquist dummy with creepy red lips and matching bowtie, in his book Night of the Living Dummy.

Carved out of coffin wood by a sorcerer, Slappy comes to life with the utterance of magic words written on a card in his pocket. Across the Goosebumps franchise, Slappy is resurrected by a variety of young characters, who often first encounter him discarded in the trash only to fall under his spell. True to his name, Slappy is known for his open-handed smacks (slaps) and horrible insults (a take on slapstick humor).

Slappy became a huge hit with Goosebumps fans, and subsequently appeared in various Goosebumps books, television shows, and video games from the mid-1990s into the 2010s. Slappy came back to life yet again in 2015 with his silver-screen debut as the main antagonist in the film Goosebumps, in which the dummy is voiced by actor Jack Black. Stine released Goosebumps: SlappyWorld in 2017, which focuses entirely on Slappy’s character. His appearance in the 2017 mobile-app game Goosebumps HorrorTown proves Slappy is a hard character to kill off.

Unrelated to young-adult horror, the term slappy also describes a classic skateboarding move invented by skater John Lucero in the 1980s. The move is a grind (sliding on an object like a curb or railing) achieved by approaching a curb at a high speed, as opposed to a jump, as if the board is slapping it. The slappy has become a core move in skateboarding.

Slappy is also an American football slang term, apparently a shortening of slapdick (“uniformed newbie,” the slang alluding to a flaccid penis), used in the NFL since the 1990s to refer to an unsuccessful, minor, or unimportant player. In an NFL TV documentary series, Detroit Lions coach Jim Schwartz described his work as a young slappy, or errand boy, for the Cleveland Browns from 1993–95. The football slappy has been credited to former Ravens coach Brian Billick, said to use slapdick for “anyone who is anything less than brilliant at his or her job.” Billick himself has said he picked up the term from Rick Smith, a publicist for the San Diego Chargers in the 1980s.

Slappy was a lot scarier in the old Goosebumps TV series just with the design of the puppet. The new one looks like one of these late-night talk show hosts to me
ErdogansBiggestFan, Reddit post, March, 2018
[Jeff George] belittled every backup he’s ever had and called Jack Trudeau a “slappy” for trying to undermine George in Indianapolis. The only sane response to George’s rantings, of course, would be to slap that slappy upside his helmet. I mean, dude! Are you kidding me? You are the biggest slappy of all time!
Brian Murphy, ESPN, October, 1999
To me, the slappy has always been at the heart of skateboarding’s inexplicable coolness. It’s so simple, and yet when you see someone carve up onto a curb like that, it’s hard not to want to go out immediately and try to recreate what you just witnessed. It’s stylish, it’s mysterious, and, best of all, it just looks like so much goddamn fun.
Rob Ridge, Jenkem, April, 2015
SEE MORE EXAMPLES

Slappy is familiar to new readers and viewers of the Goosebumps franchise and nostalgically referenced among adults who came of age on the original books in the 1990s. Slappy has also appeared in so-called dank memes, with image macros including  “Who you calling dummy, dummy!” and “Slappy…making people his slaves since 1993.”

The skateboarding slappy is used by amateur and professional skateboarders and the sport’s enthusiasts, especially familiar to younger males. Online magazines, forums, blogs, YouTube channels, and other social-media feeds dedicated to skateboarding share history, tutorials, and photo and video examples of moves like the slappy. The plural form of slappy is slappies, and skilled performers of the move have been called slappiers.

The NFL slappy can refer to a person as well as thing or situation that is considered subpar or mediocre. The term is familiar to NFL players, coaches, employees, and fans, though occasionally is referenced in mainstream culture in allusion to football culture. Slappy‘s original full form, slapdick, is considered vulgar and many may find it offensive.

This is not meant to be a formal definition of slappy like most terms we define on Dictionary.com, but is rather an informal word summary that hopefully touches upon the key aspects of the meaning and usage of slappy that will help our users expand their word mastery.

Side to Side
Sonic.exe
Home / Words / Pop Culture / slappy