What does steampunk mean?

Steampunk is a literary and aesthetic movement that takes inspiration from 19th-century science fiction and fantasy as well as the technology of that era, especially the steam engine.

Where does steampunk come from? 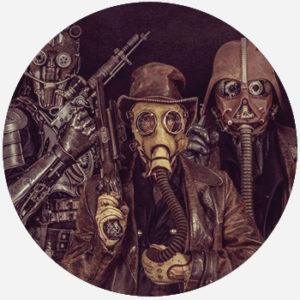 The earliest inspirations for steampunk as a literary genre come from the works of H.G. Wells and Jules Verne. Both wrote science fiction set in their own times (the late 1800s) that featured advanced technology powered by steam, hence the “steam” in steampunk, and clockwork, including flying machines, submarines, and time machines.

The steampunk aesthetic itself tends to be loosely based on the Victorian era and the American Wild West, but also features anachronistic technology. Essentially, as a genre of speculative fiction, it asks “What if ____ were invented in the 1800s?” To that point, steampunk technology tends to be things that didn’t come about until after the 1800s, but built using that era’s technology (i.e., powered by steam and/or clockwork).

As for the term itself, it was most likely coined in 1987 by science fiction writer K.W. Jeter, who used the term in a tongue-in-cheek letter to Locus, a science fiction magazine, to describe his own work as well as that of Tim Powers and James Blaylock. While literature and TV around these themes had been around since at least the 1950s, it’s most likely Jeter was using the term to draw parallels with cyberpunk, a term for another science fiction genre that emerged around the same time.

In 1990, William Gibson and Bruce Sterling published The Difference Engine, which was considered the first outright steampunk novel.

In the early 2000s, steampunk fashion, music, literature, and comics became more popular, especially with the rise of blogging platforms like LiveJournal and Myspace. The first steampunk convention, SalonCon (like a Victorian salon) took place in 2006, and ran for three years after that. Inspired by it, other conventions and events continue to take place worldwide.

“Starting no42 - TREASURE PLANET. A little concerned with the space context but it seems to be more steampunk with sci-fi thrown in so far”
Simon Columb @screeninsight Twitter (May 9, 2017)
“To me, steampunk has always been first and foremost a literary genre, or least a subgenre of science fiction and fantasy that includes social or technological aspects of the 19th century (the steam) usually with some deconstruction of, reimagining of, or rebellion against parts of it (the punk).”
“JRRL,” Steampunk.com (October 13, 2010)
“They build lumbering contraptions like the steampunk treehouse, a rusted-out 40-foot sculpture assembled last year at the Burning Man festival in Nevada and unveiled last month at the Coachella music festival in Southern California.”
Ruth La Ferla, “Steampunk Moves Between 2 Worlds,” The New York Times (May 8, 2008)
SEE MORE EXAMPLES

Steampunk can refer to the literary genre or style (“a steampunk novel” or “that outfit is steampunk”) as well as its fans (“I’m a steampunk”).

This is not meant to be a formal definition of steampunk like most terms we define on Dictionary.com, but is rather an informal word summary that hopefully touches upon the key aspects of the meaning and usage of steampunk that will help our users expand their word mastery.