What does table shower mean?

Where does table shower come from? 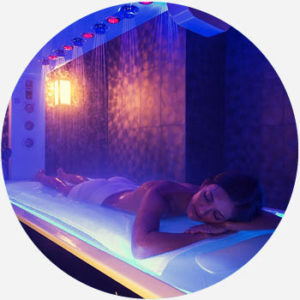 While water has long been used for therapeutic purposes, the exact origin of table showers is unclear.

One important antecedent is the Vichy shower, named for the historic thermal springs and spa culture of Vichy, France. Ancient Romans, medieval French royalty, and modern-day tourists have all enjoyed the rejuvenating waters of the French resort city, which produced its namesake, the Vichy shower, by the 19th century.

Vichy showers feature a bar with shower nozzles arranged over a special, self-draining table (wet table). The massager sprays the client, usually with a strategic mix of hot and cold water while giving the person a hand massage. The practice helps exfoliate and detoxify the skin while soothing sore muscles and reducing stress.

In 20th-century massage and hydrotherapy, Vichy showers became known as table showers, especially in the US. Especially at spas and resorts, clients often get a table shower treatment after a body scrub or wrap, with shower heads placed over different parts of the body (with a focus on the back) at varying degrees of warmth, pressure, and pulsation. Clients frequently wear a towel or disposable garment during the table shower.

By the 2000s, East Asian massage parlors in the US were increasingly adopting table showers in their practice, with some advertising a more sensual experience—and some customers fearing or expecting a more sexual one, in line with stereotypes about the services offered at Asian massages.

Do you feel dirty? Visit us for a great table shower
@GreenleafSpa, March, 2018
The one they busted in SF recently had about 8 signs outside advertising the TABLE SHOWER which seemed like a good tip
@derivativeburke, March, 2018
Table shower massage is said to be very beneficial when it comes to improving the healing process. If you had some kind of muscle or joint injury, this could be the right thing for you.
Sarah, YouQueen, May, 2012
SEE MORE EXAMPLES

The term table shower is used by massage therapists and hydrotherapists, especially at high-end resorts, spas, and massage parlors though sometimes in physical therapy settings.

Enjoy a table shower/massage combo special: $70 for 1 hour by appt. only. pic.twitter.com/Oj59i6zxkL

Calling them a Vichy spa can give the treatment a more exotic or pampering air.

This is not meant to be a formal definition of table shower like most terms we define on Dictionary.com, but is rather an informal word summary that hopefully touches upon the key aspects of the meaning and usage of table shower that will help our users expand their word mastery.