What does The Aristocrats mean?

That’s Southpark‘s version of it …

The Aristocrats is an infamously dirty joke. Its setup describes a family pitching an act to a talent agency that may involve bestiality, incest, and coprophilia (look it up). The agent asks what the act is called and the punchline is “The Aristocrats!” Because rich people? The point of The Aristocrats is its shock value, it’s taboo, duh.

Where does The Aristocrats come from? 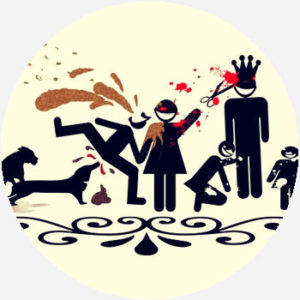 The word aristocrat comes from the Greek aristos, meaning “best.” It dates back to the French Revolution in the late 1700s and refers to a member of the ruling or economic elite—the “let them eat cake” types.

During vaudeville (1880s–1930), comedians told a version of The Aristocrats to make fun of rich folks who thought they were too good for popular entertainment and spent their snobby money at the opera instead. During this time, the punchline was often “the debonaires” or  “the sophisticates,” as well as “the aristocrats.”

Vaudeville went out of style with the rise of the movies in the late 1920s. In the 1930s, morality and public decency were valued over raunchiness in film and entertainment, pushing the joke underground and turning it into a kind of backstage tradition of comedians trying to outdo each other with the most shocking jokes.

British comedian Bill Cryer remembers hearing the joke in the 1940s with the punchline “the sophisticates,” but claims he never told it in public. The Aristocrats settled in as the popular punchline in America.

The joke came out of the shadows, so to speak, in 2001 at a Friars Club roast of Hugh Hefner. It was only a couple of weeks after the terrorist attacks of 9/11, but comedian Gilbert Gottfried lead with a joke about the Twin Towers. The heckling was so bad he changed tactics but went on to a version of The Aristocrats that was so scandalous Comedy Central deleted it from subsequent airings. Here’s a very NSFW audio version of Gottfried telling the joke:

The chatter following Gottfried’s bit helped inspired a 2005 documentary film by Paul Provenza and Penn Jillette called The Aristocrats, which featured over 90 comedians telling their version of the joke.

Examples of The Aristocrats

The last issue of the Times is going to end with. “The Aristocrats!”
@archaica, July, 2018
[I]t’s the ideal joke for a comedy documentary. It probes the darkest, sickest places of the comedian’s mind. “When you hear someone tell The Aristocrats,” Penn Jillette observes, “very clearly it’s the singer, not the song.”
Elise Czajkowski, Vulture, August, 2012
internet pornography is the reason no one tells The Aristocrats anymore. We've seen it all already, man.
@allison_mick, July, 2018
SEE MORE EXAMPLES

Who uses The Aristocrats?

Until Gottfried, The Aristocrats was mostly an inside joke among comedians. Comedians from Bob Sagett, who played the wholesome dad on Full House, to Academy Award-winning actress Whoopi Goldberg, have all told and enjoyed some version of the joke.

Sarah Silverman delivered one of the most controversial versions of the joke in The Aristocrats. After an emotionally halting first-person childhood “account” in which she auditioned on Joe Franklin’s show, Silverman swapped out The Aristocrats punchline for a deadpan “Joe Franklin raped me.” Franklin threatened to sue and she apologized for going “too far.”

On social media, people sometimes reference versions of the punchline, “And they called it the Aristocrats,” in sarcastic responses to other people’s tweets complaining about minor things—or to comment on the unrelenting awfulness of the news.

“And it’s called the Aristocrats!”

This is not meant to be a formal definition of The Aristocrats like most terms we define on Dictionary.com, but is rather an informal word summary that hopefully touches upon the key aspects of the meaning and usage of The Aristocrats that will help our users expand their word mastery.