What does Vector Marketing mean?

Vector Marketing is a multi-level marketing company that sells CUTCO cutlery and kitchen knives. It’s widely regarded as a pyramid scheme due to a reliance on the recruitment of subordinates to turn a profit.

Where does Vector Marketing come from? 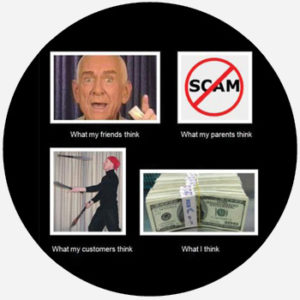 Vector Marketing was founded in 1981 as an independent seller of CUTCO brand knives. Online, the company has had an unfavorable reputation since at least the 1990s.

Their reputation likely got to such a point due to legal trouble the company encountered around the same time. Notably, in 1992, the state of Wisconsin and Vector reached a settlement after consumer-protection investigators found that half of a sample of 940 recruits either made no money or lost money working for Vector.

Despite their bad reputation, Vector continues to thrive due to their tendency to target people in college or high school, promising them a flexible work schedule with lots of money. About 60,000 college students a year are recruited with these assurances, but they soon find they must buy their own set of expensive knives to show potential buyers. Even if they buy a set of knives, many struggle to make a profit.

Recruitment occurs in cycles, which causes people to inevitably research the company and talk about it online. Searches about Vector Marketing generally tend to increase around May and June each year, which is the time they target college and high-school students who have graduated or who are on summer breaks.

Ohhhhh I know the Vector marketing scam too! I had them call me in for an interview, I realized what it was and left.
Vanlande, Reddit, March 2017
Vector Marketing was banned from several colleges due to their requirement that students pay for products they need to sell, Blake said.
Nikhilesh De, Daily Targum, April 2017
However, if you look up Vector Marketing on Wikipedia, you will find that the company has been accused of unsavory business practices by some.
Webeditor, The Reflector, April 2013
SEE MORE EXAMPLES

As it’s often identified as a multi-level marketing scheme, there are many websites, articles, and videos dedicated to educating people about Vector Marketing. These videos usually attempt to get people to stay away. Common headlines include “Is Vector Marketing a Scam?” or “Vector Marketing Scam.” The words scam and pyramid scheme commonly come up when the term is searched for online.

People who talk about Vector Marketing often bring up their experiences either working for the company or attending one of their interviews.

The company’s negative reputation is so well-known online that when other stories pop up that center around deceptive companies with similar tactics, people will often compare aspects of the story to Vector.

This is not meant to be a formal definition of Vector Marketing like most terms we define on Dictionary.com, but is rather an informal word summary that hopefully touches upon the key aspects of the meaning and usage of Vector Marketing that will help our users expand their word mastery.