What Does the Fox Say?

What does What Does the Fox Say? mean?

What Does the Fox Say? is the main chorus of “The Fox,” a 2013 novelty song and video by the duo Ylvis, imagining the possible vocalizations of a fox.

Where does What Does the Fox Say? come from? 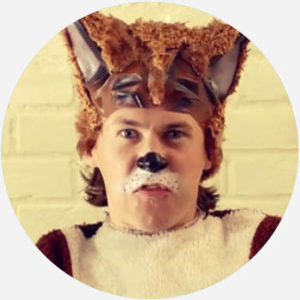 The Norwegian brothers Bård and Vegard Ylvisåker, known together as the comedy duo Ylvis, had an offbeat idea in 2013: Make an intentionally terrible song, pair it with a high-quality, studio-level music video, and release it as a joke they expected to fail but help promote their Norwegian TV show.

Ylvis decided to focus their song and video on what sound a fox makes. We commonly say dogs bark, cows moo, and ducks quack, but Ylvis observed that foxes generally have no onomatopoetic sound associated with them—though, in reality, they make a yip sound sometimes confused with a hooting owl.

“The Fox” premiered on YouTube (with Ylvis dressed in silly fox costumes) in September, 2013 and quickly became a massively viral success, earning over 750-million views and spawning an internet meme based on its chorus line, What does the fox say?

Ylvis widely gave live performances of their song and appeared on TV shows.

Examples of What Does the Fox Say?

What Does the Fox Say About Parenting Tweens and Teens?
Sarah Bamford Seidelmann, HuffPost (headline), January, 2014
When they only ask what does the fox say and never how does the Fox feel
@qzarl, April, 2018
My mom is dealing with a fox in her backyard. She can’t even let her dog outside.. and every time she starts complaining about it, my only reponse is “WHAT DOES THE FOX SAY!!? Ring ding ding da ding ding!!”🦊🦊🦊
@alxsuz, April, 2018
SEE MORE EXAMPLES

Who uses What Does the Fox Say??

What Does the Fox Say? is recognized as a piece of mid-2010s pop culture, often discussed in the context of viral content and internet culture more generally.

It is sometimes quoted by comedians and alluded to on TV, in movies, and around the internet. Memes of What Does the Fox Say? picture foxes and provide captions providing funny, alternative things the fox is saying.

A prominent sound effect that the fox is given in the song and video, ring-ding-ding-ding-ding, is also often referenced and used with images of foxes on social media.

Online content genuinely concerning foxes also often playfully alludes to, or jokingly prompts, references to What Does the Fox Say?

wet market
what happens in Vega...
Home / Words / Pop Culture / What Does the Fox Say?