Feedback
What Does the Fox Sa...
white privilege

what happens in Vegas

What does what happens in Vegas mean?

Where does what happens in Vegas come from? 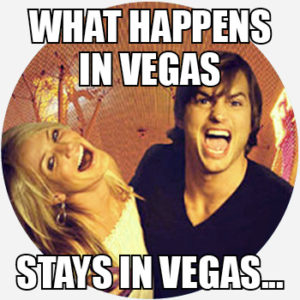 In 2003, advertising agency R&R Partners developed the slogan What Happens Here, Stays Here for the Las Vegas, Nevada tourism department. Featured in wildly successful commercials, the slogan may have been in part inspired by the phrase what happens on tour stays on tour, a phrase with roots in traveling English sporting teams. When on tour and away from their partners back home, players could live liberally with the tacit understanding that none of their teammates would rat them out upon return.

With their slogan, R&R stated they wanted to convey that feeling of freedom that visitors to Las Vegas feel when gambling and partying there—the feeling that they could be whoever they wanted be while there and then go back to their lives afterward like nothing had happened, no sins need be confessed. The slogan soon became more commonly known as what happens in Vegas, stays in Vegas or as the shortened form what happens in Vegas.

Cameron Diaz and Ashton Kutcher starred in a 2008 film titled What Happens in Vegas, coinciding with the highest volume of Google searches for the phrase. In the film, two strangers end up married on vacation in Vegas and have to deal with the consequences when they return to their lives in New York. The plot is a subversion of the traditional meaning of the phrase what happens in Vegas, since instead of leaving behind their wild and crazy activities in Las Vegas, the fallout follows them home.

R&B singer Usher released a song in 2008 called “Love In This Club, Pt. II,” featuring Beyoncé, Lil Wayne, and the lyric: “Come a little closer let daddy put it on ya / Need you to know, what happens here stays here.” In the 2009 comedy, The Hangover, a character (Jeffrey Tambor) reminds his son before heading out to Vegas for a bachelor party: “What happens in Vegas, stays in Vegas…Except for herpes. That shit’ll come back with you.”

At points in the city’s history, the what happens in Vegas slogan has been shelved for publicity reasons. For instance, the slogan and related marketing efforts were put on hold for three months after the October 2017 slaying of more than 50 people at a Las Vegas country music festival.

Examples of what happens in Vegas

What happens in Vegas stays in Vegas... except for the bruises. One game down five to go! Thank you to everyone who donated and helped us get here!
@cuwomens_rugby, March, 2018
What happens in Vegas doesn’t always stay in Vegas—sometimes it ends up in a Cash Cash music video. The EDM trio can’t wait till nightfall to hit the clubs in their new clip for “Broken Drum,” which features Fitz of soul-pop outfit Fitz and the Tantrums and premieres today on EW.
Nolan Feeney, Entertainment Weekly, June, 2016
The world’s biggest pizza trade fair is not held in Naples or even Rome, but Las Vegas. Here 8,000 of the world’s pizzerati gather to catch up with friends, spy on the opposition and seek marginal competitive advantages. They attend seminars called things like “Pizza Crust Boot Camp, Part 1: Technical” or “Menu Labelling: Is It Right For You?” What happens in Vegas stays in Vegas, except if it is crust innovation.
Ed Cumming, The Guardian, May, 2017
SEE MORE EXAMPLES

Who uses what happens in Vegas?

Today, brands and individuals use the what happens in Vegas slogan to talk about vacations to Las Vegas, sometimes but not exclusively with a suggestive undertone. Popular media also cleverly reference it when reporting about stories set in Las Vegas. The saying has also been modified to accommodate the names of other places, such as in Toby Keith’s 2004 song, “Stays in Mexico.”

With the widespread popularity of social media, the phrase what happens in Vegas has taken on a somewhat ironic quality. In fact, the modified saying what happens in Vegas does not stay in Vegas has spread into common usage, as does humorously noting some exception, like Tambor in The Hangover. Marketers for Las Vegas picked up on this subverted meaning as early as 2011, running commercials about vacationers who “broke the code” by sharing pictures and videos from their Las Vegas vacations on social media.

What Does the Fox Sa...
white privilege
Home / Words / Pop Culture / what happens in Vegas