Feedback
what happens in Vega...
Wonderwall

What is white privilege?

White privilege is the unearned, mostly unacknowledged social advantage white people have over other racial groups simply because they are white.

In this cultural moment, the concepts of “race” and “ethnicity” have never been more important—and complicated—to grasp. Learn why here.

Where does white privilege come from? 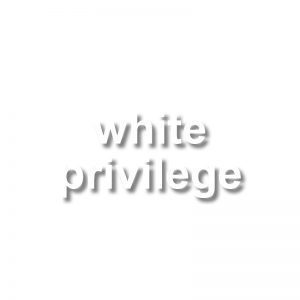 The term and concept of white privilege was popularized by Peggy McIntosh, an influential scholar and activist. In 1988, McIntosh wrote a paper called “White Privilege and Male Privilege: A Personal Account of Coming to See Correspondences Through Work in Women’s Studies,” in which she likened white privilege to “an invisible weightless knapsack of special provisions, assurances, tools, maps, guides, codebooks, passports, visas, clothes, compass, emergency gear, and blank checks.”

1. I can, if I wish, arrange to be in the company of people of my race most of the time.

3. If I should need to move, I can be pretty sure of renting or purchasing housing in an area which I can afford and in which I would want to live.

4. I can be reasonably sure that my neighbors in such a location will be neutral or pleasant to me.

5. I can go shopping alone most of the time, fairly well assured that I will not be followed or harassed by store detectives.

6. I can turn on the television or open to the front page of the paper and see people of my race widely represented.

7. I can be sure that my children will be given curricular materials that testify to the existence of their race.

8. I can be pretty sure of having my voice heard in a group in which I am the only member of my race.

A year later, McIntosh wrote an essay titled “White Privilege: Unpacking the Invisible Knapsack,” which was published in the Peace and Freedom Magazine in the summer of 1989, and is often referred to as a white privilege primer for those looking to learn more about it.

In the years since, the term white privilege has come to be used to explain power structures and racial inequality inherent in American society that supports white supremacy by disproportionately benefiting white people while putting people of color at a disadvantage.

Interest in the term white privilege notably spiked in 2020 during protests against violence inflicted on Black people involving police. The protests helped create a global conversation on racism and discrimination; specifically, understanding and acknowledging white privilege was discussed as one important step in being anti-racist and ensuring equal civil rights.

WATCH: Do You Know If Intersectionality Affects You?

"White privilege" has become a common phrase in Americans' conversations about race — and that's unsettling many white Americans because they think it undervalues their struggles or questions the legitimacy of their successes.
Erica Pandey, Axios, August 2019
What does white privilege mean today? In part, it means to live in the world while being given the benefit of the doubt. Have you ever been able to return a sweater without a receipt? Has an employee ever let you into a store after closing time? Did a car dealership take a little extra off the sticker price when you asked? When’s the last time you received service with a smile?
Ian Ayres, New York Times, 2015

The phrase check your privilege is often used to remind white people  that white privilege exists and of the unearned advantages—of which they are so often unaware—they have in society by virtue of their skin color. When white people are defensive and angry about evidence of white privilege, that’s referred to as white fragility. Formally defined, white fragility is “the tendency among members of the dominant white cultural group to have a defensive, wounded, angry, or dismissive response to evidence of racism.”

Some scholars argue the use of the term white privilege can make use of whiteness as a proxy for class and ignores other power structures and inherent privileges that come with a range of societal identities. Legal scholar Kimberlee Crenshaw is credited with coining the term intersectionality to address those multiple identities that affect how one is perceived and treated by the rest of the world. Other scholars argue such terms as white dominance are more effective terms.

This is not meant to be a formal definition of white privilege like most terms we define on Dictionary.com, but is rather an informal word summary that hopefully touches upon the key aspects of the meaning and usage of white privilege that will help our users expand their word mastery.