What does Karen mean?

Karen is a pejorative slang term for an obnoxious, angry, entitled, and often racist middle-aged white woman who uses her privilege to get her way or police other people’s behaviors.

As featured in memes, Karen is generally stereotyped as having a blonde bob haircut, asking to speak to retail and restaurant managers to voice complaints or make demands, and being an anti-vaxx , Generation X soccer mom.

In 2020, Karen spread as a label used to call out white women who were captured in viral videos engaging in what are widely seen as racist acts.

Where does Karen come from? 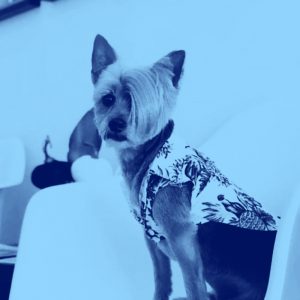 Karen joins a trend on the internet in the 2010s of using a first name to make fun of certain kinds of people. A Becky, for example, is a stereotype for a “basic” young, white woman, while a Chad, in other corners of the internet, stands in for a cocky, young “dudebro.”

But, why the name Karen? Karen has widely been credited to Black Twitter in the 2010s. Another suggestion is that it comes from a 2005 bit by Dane Cook called “The Friend Nobody Likes.” (The friend was named Karen.) An additional explanation is that it comes from the character Karen in the 2004 film Mean Girls, who’s the subject of the popular quote: “Oh my God, Karen, you can’t just ask someone why they’re white.” It’s even been put forth that Karen comes from the even earlier 1990 film Goodfellas, in which one of the characters is named Karen.

Whatever the origin of the slang, the name Karen, apparently, is popularly thought of as a generic-seeming name for a middle-aged white woman of a certain generation. According to Social Security data, Karen was indeed the fourth most popular name for newborn girls in the 1960s, peaking at #3 in 1965.

Record of the insult Karen appears as early as September 2016 when a Tumblr user, joematar, made fun of a promo for Nintendo Switch in which a white woman (appearing to be in her late 20s or early 30s) brings the gaming device to a party. The user refers to this supposed kill-joy as Karen: “Oh shit, Karen brought her stupid Nintendo thing to the party again. We’re DRINKING, Karen. We’re having CONVERSATIONS.”

The character was further developed in December 2017 thanks to a subreddit dedicated to mocking the imagined Karen (somewhat like Cook’s “The Friend Nobody Likes” bit). Tropes that developed about Karen here were that she is an annoying (and always annoyed) middle-aged, suburban, minivan-driving white, divorced mother of poorly behaved boys (of whom she has custody) who has a so-called “speak to the manager” haircut. 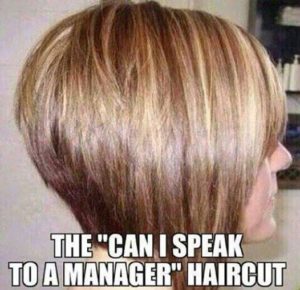 This haircut is a short, angled blonde bob, sometimes called a “mom haircut.” “Speak to the manager” refers to escalating complaints or demands from retail or restaurant workers to their managers—a stereotypical behavior of Karen. The “Speak to the Manager Haircut” meme has been around since 2014. In September 2018, the “Speak to the Manager” haircut meme merged with Karen when it was uploaded to the Karen subreddit by user vidoardes.

Beginning in at least 2017, Karens have been closely associated with Baby Boomers. Some millennials and members of Generation Z have called out boomers for being close-minded and behind-the-times, especially when it comes to unprogressive views on such things as gender, sexuality, and youth culture more generally (such as the viral “Kidz Bop Karen” woman video videotaped in a road confrontation).

Spreading online in early November 2019 was a joke that Generation X is the Karen Generation (the name being associated with people born between 1964–85). This came on the heels of OK boomer, a slang phrase (and viral phenomenon) dismissing opinions and attitudes associated with Baby Boomers (especially white male members of this generation). This prompted some reporters to investigate intergenerational conflict on social media further. BuzzFeed ran a piece on November 14, called “Gen Z is Calling Gen X ‘The Karen Generation’,” citing some activity on Twitter and TikTok.

Me: For the last time, I'm Gen X. Your insults have no power over me.

That was a bit low.

Karen further spread in 2020 amid the coronavirus pandemic and protests for racial justice. White women in viral videos—engaging in what was criticized as selfish or racist behavior—were shamed as Karens. The mayor of Las Vegas, for example, was called a Karen when, in a TV interview, she pushed to reopen casinos without social distancing despite warnings otherwise. Another notable instance was “Central Park Karen,” the epithet for a white woman who called the police on a Black man who was birdwatching in the Manhattan park, falsely accusing him of threatening her.

Also in 2020, popular discussions online considered the name for a male Karen. Many people put forth similarly generic white male names associated with Baby Boomers or Generation X, such as Richard, Kevin, and Ken. On the one hand, that no male name has quite taken hold (male Karens being called male Karens) suggests that, while Karen calls out racism, some misogyny is always at work in the slang. Due to these misogynistic dimensions of Karen, on the other hand, a related topic was whether Karen was a slur—a concern that many dismissed as it erases white privilege and systemic racism from the social equation. Karen is indeed a very loaded, complex slang term that continues to evolve.

During summer 2020, the term Karencore gained some traction as an ironic “appreciation” of the unique fashion and aesthetics (-core) often associated with the Karen stereotype. Karencore includes things such as the “speak to the manager” haircut, minivans, rhinestones, “Live, Laugh, Love” posters, and Spotify playlists consisting of 2000s-era pop/pop-rock songs.

And if you’re curious, in 1965, the year Karen reached its peak popularity as the third-most popular girls name in the US? The male counterpart was David.

Amid the coronavirus pandemic, “Karen” has been adopted as a shorthand to call out a vocal minority of middle-aged white women who are opposed to social distancing, out of either ignorance or ruthless self-interest.
Kaitlyn Tiffany, The Atlantic, May 6, 2020
A new video—which is somehow even more disturbing than the first—has surfaced of SoCal Karen. The clip shows the woman confront an Asian man in a parking lot and launch a series of racist remarks at him.
TMZ, June 12, 2020
no karen our BOGO for a $1 does not mean you can buy a large water and get a double bacon quarter pounder for a $1 that’s just not how it works
@dallondotcom, November 20, 2019
"Kidz Bop Karen," nicknamed after she claimed her children couldn't hear her unleashing a foul-mouthed rant against a driver who allegedly cut her off because they were listening to children's music, has become a mega-viral meme.
Kalhan Rosenblatt, NBC News, November 5, 2019
SEE MORE EXAMPLES

Karen, with her “speak to the manager” haircut often prominently figured, is used in memes and on social media when complaining about an obnoxious, ignorant, difficult, offensive woman or the stereotype of such a woman. Increasingly, Karen has become more generally used to insult white women accused of taken advantage of their white privilege.

Example targets have included: women who complain to retail staff or waiters, women who are always surprised when it gets dark earlier in the winter months, or women who call anywhere they work (like the beach) their “office.”

Karen is often used as a stand-in name in an imagined dialogue. For example: “Mind your own business, Karen” or “No, Karen, we can’t go to Taco Bell.”

Karen may also be used to call out older adults considered to have narrow-minded viewpoints.

no, karen, no boy will see you naked. only women. just say you're transphobic and go https://t.co/YHygLGg6Nd

Because Karen is a stereotype of a woman of a certain age, some may consider it offensive, sexist, or ageist … or Karen-ist, though it appears most people named Karen have a good sense of humor about it.

This is not meant to be a formal definition of Karen like most terms we define on Dictionary.com, but is rather an informal word summary that hopefully touches upon the key aspects of the meaning and usage of Karen that will help our users expand their word mastery.