What does dudebro mean?

A dudebro is a humorous or derisive slang term stereotyping a young, usually white man as a partying prep or jock who is unaware of his own privilege.

Where does dudebro come from? 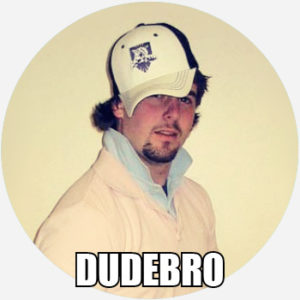 As a word, dudebro is a comical compound of dude and bro, the combination serving to intensify stereotypical young male qualities. Both terms are used heavily by stereotypical men to refer to one another.

In the late 19th century, dude was used to deride a foppish male and possibly derived from “Yankee Doodle Dandy.” By the 1980s, dude expanded as a general slang term for any “guy,” though it usually carried connotations of being cool, masculine, or airheaded. Bro has been shortened in Black English since the 18th century and used throughout its history for fellow black men to refer to one another. By the 1990s, bro expanded, like dude, as a slang term for any “guy” but started shading toward athletic, fraternity-styled white guys, incorporated especially into portmanteau words like brogrammer and bromance.

In the 1990s, dude and bro began appearing as a pair in informal address between men and in some instances as a descriptor of a particular type of individual (e.g., a surfer dude bro). In the 2000s, their co-occurrence became frequent enough to fuse them as a closed compound (i.e., dudebro) and earn them an entry on the useful slang barometer, Urban Dictionary. Together, the term dudebro exaggerates negative qualities variously associated with young, usually white males: heavy beer drinking and pot-smoking, a preppy look, jockish demeanor, and privileged upbringing.

In 2012, dudebro rose to particular prominence. In October, the term appeared in the name of a video game, Dudebro II, inspired by a post that imagined the mock title for a first-person shooter video game as, Dudebro, My Shit is Fucked Up So I Got to Shoot/Slice You II: It’s Straight-Up Dawg Time. The name was meant to parody the types of video games young men stereotypically enjoy. In November of 2012, dudebro was back in the spotlight when a popular Guardian article detailed the traits of a dudebro, as experienced by the writer of the article and in a humorous effort to create a definitive profile of the dudebro.

The only positive thing dudebro types have ever introduced into my life was the concept of the showerbeer
@winxchub, February, 2018
Luckily, most dudes aren't dude-bros, and male culture in the US is shifting to allow a diversity of male experience and expression.
Jill Filipovic, The Guardian, November, 2012
Last night, some misogynist dudebro called me “snarky” as an insult. Snarkiness is one of my superpowers. I don’t know why he thought I should be insulted by my own superpower.
Jen Larkin, Whatever (blog comment), August, 2013
SEE MORE EXAMPLES

The term dudebro is used in speech and digital communication to ridicule obnoxious, entitled, clueless, hyper-masculine guys—who can also be referred to as douchebags. The label sometimes implies men who are sexist, homophobic, racist womanizers.

However, dudebro can also be used as a placeholder word or modifier for any young man. It’s often used as a proper noun (e.g., “Look at dudebro over their with the cargo shorts”) or a distancing determiner (e.g., “That dudebro tried to get my phone number”). Some young men will use dudebro as an affectionate term, expressing friendship, familiarity, and a shared identity.

This is not meant to be a formal definition of dudebro like most terms we define on Dictionary.com, but is rather an informal word summary that hopefully touches upon the key aspects of the meaning and usage of dudebro that will help our users expand their word mastery.