What does bye, Felicia mean?

Bye Felicia is a slang way of dismissing someone. Sometimes formatted as bye, Felicia and based on movie character whose name is spelled Felisha, bye Felicia often appears in memes, GIFs, and hashtags online to express disregard or indifference to someone,  as if to say, “That’s it. I’m done putting up with you. I’m so over this. Goodbye.”

Where does bye Felicia come from? 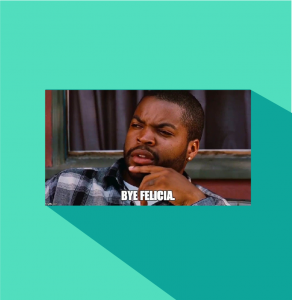 “Bye, Felisha” is a line spoken by Ice Cube’s character, Craig, in the popular 1995 comedy film, Friday. While smoking a joint with his friend Smokey, Craig is approached by Felisha, a local girl who constantly annoys the neighborhood with her attempts to mooch off others. After her request to borrow Smokey’s car is met with total refusal, she turns to Craig for support, and, rather than offer to help or defend her, he looks away and simply says “Bye, Felisha” in a dismissive tone. 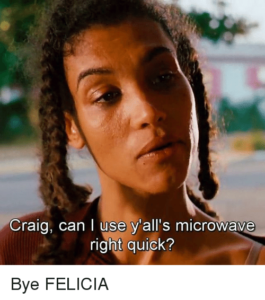 The term bye Felicia has been popular in Black culture since the 1990s when the film was released, although the original spelling of the name “Felisha” has changed to the more common (and, some would point out, more “white”) spelling, Felicia.

Bye Felicia is considered by some to be an example of white culture appropriating Black culture, often with little knowledge of the original source material. Friday, the film from which the phrase originates, has been a popular and beloved cult classic in modern American Black culture, though the phrase’s sudden rise in popularity is several times removed from the film. It’s important to keep all this context in mind when using or encountering the phrase.

The phrase’s social acceptability has also come into question since the release of the 2015 film Straight Outta Compton by F. Gary Gray, the same director who made 1995’s Friday. In Straight Outta Compton, there is a scene that was initially thought to be a depiction of the bye, Felicia origins. The scene involved an orgy in a hotel room and the forceful removal of a woman named Felicia, ending with Ice Cube echoing his original delivery of “Bye, Felicia” in a more aggressive context than in Friday. Although the filmmakers clarified that the scene was a fictitious depiction of bye, Felicia’s origins, some felt that the misogynistic scene tainted the phrase.

@Twitter is suggesting me to follow @POTUS and @Scientology today. Guess that means it's time to delete this app. #neverever #ByeFelicia
@Maggie_OBrien5, March, 2017
I wondered how some of my white male friends could vote for Trump when I helped them understand what ‘Bye Felicia’ really meant.
Janell Roberts, “My Problem with the White Feminist Reaction to the Presidential Election,” The Black Print, November, 2016
Olbermann was the first one to prominently use ‘Bye Felicia’ to dismiss those who were about to exit the political arena, and it stuck.
Bill Palmer, “What does “Bye Felicia” mean in political circles? Here’s what you need to know.” Daily News Bin, December, 2015
SEE MORE EXAMPLES

Bye, Felicia enjoyed renewed popularity around 2009 thanks to its frequent use on the reality TV show RuPaul’s Drag Race.

The phrase got another bump in December 2018, when former First Lady of the United States, Michelle Obama, used it as a guest on The Tonight Show Starring Jimmy Fallon to describe what was going through her head as she and President Obama waved goodbye to the White House at the end of Obama’s presidency in January 2017.

Critics of Donald Trump directed many a sarcastic Bye Felicia online in the final days of his presidency in January 2021.

Bye Felicia is most often used humorously or as a way to throw shade at someone, suggesting the speaker couldn’t be bothered with another person’s presence or is surprised they haven’t left yet.

While humor is almost always part of the intention in using the term, the tone in which it is said has changed somewhat over time. Initially, bye Felicia was said coolly or nonchalantly, as in the movie Friday; now, it’s just as often used in a more aggressive or melodramatic way.

Ice Cube discussed the ongoing popularity of the phrase in an interview with Conan O’Brien, stating, “That is the phrase to get anybody out of your face that’s saying something stupid.”

@craigmelvin watching @TODAYshow and hear the infamous “Bye Felisha” from our very own Craig 😂 pic.twitter.com/Rau5k6vqPh

This is not meant to be a formal definition of bye Felicia like most terms we define on Dictionary.com, but is rather an informal word summary that hopefully touches upon the key aspects of the meaning and usage of bye Felicia that will help our users expand their word mastery.