Feedback
white girl
Who's your daddy?

What does whitesplain mean?

Whitesplaining is the act of a white person explaining topics to people of color, often in an obliviously condescending manner, and especially regarding race- or injustice-related issues.

Where does whitesplain come from? 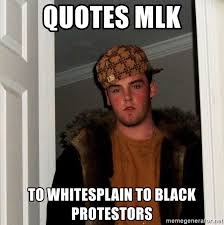 Whitesplain is modeled after mansplain, a phonetic blend of man and explain popularized in 2008. -Splain has since become an affix signifying a patronizing, condescending explanation, usually given by a person in a privileged position.

Whitesplain, then, is when a white person explains a topic, often concerning matters of social justice or minority culture, in an overconfident, often inaccurate manner to people of color. It is evidenced on blogs by at least 2010.

Whitesplain spread in the 2010s. It was added to Urban Dictionary in 2013, featured on MTV Decoded in 2015, and was the subject of articles on such outlets at HuffPost and USA Today in 2017–18.

the other tried to whitesplain to me that "there are bigger issues for Natives to worry about other than mascots," to which I promptly told him that he doesn't get to decide which Native issues are more important, among other things.
@AliNahdee, January 2019

...I’ve had white people try to explain racism to me, a woman of color. There’s a word for this phenomenon, too – whitesplaining. It’s incredibly frustrating to share my experiences with racism, only to have a white person try to speak over me about it – and often by belittling how racism hurts me...If you’re white, you may have whitesplained without realizing it.

Whitesplain and whitesplaining are commonly used in the context of white people trying to talk about issues people of color face (e.g., racism and marginalization) to other people of color.

the way white americans try to like. whitesplain their misinfo on other countries when some of them don’t even know what falafel is like y’all Bold bold huh

The term criticizes attitudes where white people sound more authoritative of issues of racial injustice than people who have lived experiences of them. Thanks to privilege, whitesplainers are usually unaware they are practicing it, however.

In 2015, actor Matt Damon notably apologized for whitesplaining after urging that people be hired in Hollywood based on merit, not diversity.

This is not meant to be a formal definition of whitesplain like most terms we define on Dictionary.com, but is rather an informal word summary that hopefully touches upon the key aspects of the meaning and usage of whitesplain that will help our users expand their word mastery.