What does Zoom mom mean?

A Zoom mom is the “soccer mom” of the 2020 COVID-19 pandemic. Due to stay-at-home orders and social distancing measures, the Zoom mom instead actively used video conferencing programs like Zoom for work, parenting, and socializing.

Example: The Zoom mom had back-to-back appointments: a meeting with her boss, a conference with her son’s English teacher, a fundraising planning session with her local library, and a virtual book club with her sisters.

Where does Zoom mom come from? 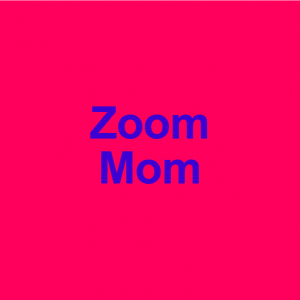 Zoom is a video conferencing program similar to Skype that allows group calls and video meetings online. During the outbreak of the COVID-19 virus in 2020, Zoom saw a dramatic surge in use, as many people and businesses relied on the program due to stay-at-home policies. During the outbreak, Zoom was used for everything from important business meetings to online classrooms to virtual happy hours.

Are you interested in learning more about the slang terms we’ve developed during the COVID-19 pandemic? Read about virtual happy hours and more in this slideshow.

In an article published on the news website Axios on May 22, 2020, writers Alexi McCammond and Margaret Talev used the phrase Zoom mom as an updated way of looking at a group of swing voters—white, suburban, middle-aged women—that are believed to be key to the 2020 American presidential election. According to the article, a Zoom mom is a mother or woman who spends a lot of time using Zoom for work, their children’s school, or simply to chat with their friends who are also staying at home.

The article compared Zoom moms to the so-called “soccer moms” who were important swing voters in the 1990s and “security moms” who were the same after the 9/11 terrorist attacks. (Indeed, the term soccer mom was popularized during the 1996 presidential election.) While plenty of people other than women have used Zoom like never before the outbreak, data indicate that men aren’t using Zoom to discuss politics as much as women are.

According to Axios, Zoom moms were the same middle-to-upper class suburban women that played a role in helping elect Donald Trump in 2016. Polling suggests, however, that many of these same women aren’t not considering voting for Trump again, making such Zoom moms an important swing vote.

In an election year defined by the coronavirus, the new voter to watch is the Zoom mom.
Alexi McCammond and Margaret Talev, Axios, May 22, 2020
Ah great. "Zoom moms." Cool ok sure another name for suburban (read: generally white and college-educated) ladies. WHY DO WE KEEP UPDATING THIS I DON'T GET IT.
@titonka, May 22, 2020

Love @margarettalev’s take on “Zoom Moms” and the 2020 election.

Another demo to watch: OLDER WOMEN. Close to 1/3 of the 2018 electorate were women age 50+ & they punch above their weight in key states, making up a higher % of voters then their proportion of the population. https://t.co/JiAelH5dXP

Just read that boozy zoom moms are going to decide this election, which means, y'all, I'm finally in the deciding mom demo!

I can report that last night's boozy zoom was decidedly anti-Trump. pic.twitter.com/vQREonUvNE

This is not meant to be a formal definition of Zoom mom like most terms we define on Dictionary.com, but is rather an informal word summary that hopefully touches upon the key aspects of the meaning and usage of Zoom mom that will help our users expand their word mastery.