What are the seven deadly sins?

Originating in Christian theology, the seven deadly sins are pride, envy, gluttony, greed, lust, sloth, and wrath. Pride is sometimes referred to as vanity or vainglory, greed as avarice or covetousness, and wrath as anger. Gluttony covers self-indulgent excess more generally, including drunkenness.

Where does the seven deadly sins come from? 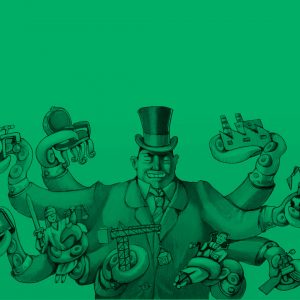 While the concept of an inventory of moral offenses has roots in antiquity, Pope Gregory I of the Catholic Church first enumerated the seven deadly sins in the late sixth century. For his list, Gregory drew from the ideas of Evagrius Ponticus, a fourth century Christian monk who identified eight evils humans should resist. Broadly speaking, the seven deadly sins function as ethical guidelines.

In his influential 13th-century text Summa Theologica, Christian theologian Thomas Aquinas further expounded on the seven deadly sins, which he called “capital vices.” To Aquinas, the seven deadly sins were the cause of all other offenses: “In this way a capital vice is one from which other vices arise.” Capital comes from the Latin caput, “head,” Aquinas explains. The head leads the body just as the capital vices, chief among them pride and greed, lead to further immorality. It was often believed that the seven deadly sins could compel Christians to commit mortal sins, grave sins that a person voluntarily committed knowing that they defied the word of God.

About a century after Aquinas published Summa Theologica, capital meant “deadly” in English. A capital crime or punishment, for instance, involved the loss of life, or the head, metaphorically. A “deadly” sin thus suggests a grave and destructive act. The seven deadly sins are also called capital sins or cardinal sins, with cardinal meaning “fundamental” and echoing capital’s sense of causation.

WATCH: Who Invented The 7 Deadly Sins?

Examples of the seven deadly sins

“The Seven Deadly Sins: 1) neediness 2) boring 3) negativity 4) insecurity 5) predictable 6) logical-communication 7) submissive”
pickupartist101 @sexmanipulation Twitter (March 12, 2017)
“They will ultimately be discomfited by the fact that envy is the only one of the seven deadly sins that does not give the sinner even momentary pleasure.”
George Will, “What Bernie Sanders doesn’t understand about economic equality,” The Washington Post (October 16, 2015)
“The concept of the Seven Deadly Sins has at least this to be said for it: that it does not allow us to compartmentalize our lives, any more than it lets us image we can sin in compartments.”
Henry Fairlie, The Seven Deadly Sins Today (2015)
SEE MORE EXAMPLES

Who uses the seven deadly sins?