What does afternoon delight mean?

Afternoon Delight is the name of a 1976 song by the Starland Vocal Band. The song, which contains innuendo about casual daytime sex (or an afternoon delight) was a hit. Because of the song’s popularity, afternoon delight has become well-recognized as a term for a midday sexual encounter, often between or instead of scheduled events.

Where does afternoon delight come from? 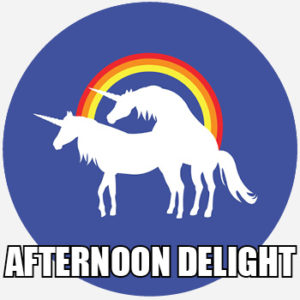 Afternoon Delight was written by musician Bill Danoff after he visited a diner, which offered a set of menu items called afternoon delights (served between lunch and dinner) and decided to use the term as innuendo. The song featured lyrics like these:

The song became very popular for its playfully coy attitude toward sex, and the phrase afternoon delight and its related meaning entered public consciousness. The song was covered several times, most recently by the TV show Glee in an episode where the Celibacy Club obliviously sings the song, thinking its lyrics “sky-rockets in flight” are a reference to the American Bicentennial in 1976. It was also prominently featured on an episode of the TV show Arrested Development, in which Maeby and her uncle Michael sing a duet of the hit at an office function, only to discover mid-song how inappropriate the lyrics are for this occasion. The newscasters in the movie Anchorman also do a cover of the song in a scene in the movie.

Afternoon Delight is also the title of a 2013 film starring Kathryn Hahn, Josh Radnor, and Jane Lynch. Additionally, it’s the name of a California-based wine.

It’s something a bit naughty you shouldn’t have been doing. You should have gone to work instead of going home for sex. And you don’t have afternoon delight with your husband!
@Julia_LePla, 2017
Scuba Shad (@theblackhippy_): “Quick question: y’all having sex in the middle of the day? Afternoon delight.
@Peekasso_, April, 2017
Afternoon Delight is a booty call, at least its [sic] supposed to be. Is sex in play for Jill and Jack, or will a desire for ice cream trump a more sensual treat? No man should ever have to choose.
Mandi Mellen & Dan Salem, “Sex is Afternoon Delight | Pillow Talk TV | Jill and Jack web series S2E17,” Pillow Talk TV, June, 2016
SEE MORE EXAMPLES

Afternoon Delight can be used to slyly refer to daytime sexual encounters (especially unplanned or spontaneous ones). As a euphemism, the term can be applied casually, although the subject matter may still offend some people. The broad concept of an afternoon delight is sometimes discussed in the same context as morning sex, another term to refer to sex at a particular time of day.

This is not meant to be a formal definition of afternoon delight like most terms we define on Dictionary.com, but is rather an informal word summary that hopefully touches upon the key aspects of the meaning and usage of afternoon delight that will help our users expand their word mastery.