What does bits and pieces mean?

Where does bits and pieces come from? 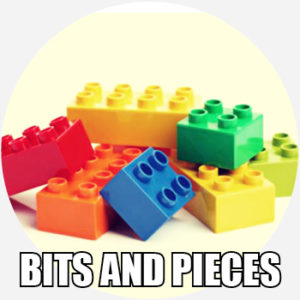 Separately, bits and pieces have long named “small fragments” or “increments” in a range of phrases. In pieces, for instance, is found as early as the 13th century while by bits appears in the 16th century. Bits and pieces, however, emerges at least by the 19th century for “various personal articles” or “fragments” of some material. Its use swelled in the 20th century.

The phrase follows a well-established pattern in the English language to convey things small and sundry: odds and ends, nooks and crannies, dribs and drabs, bits and pieces. The construction features an expressive redundancy that serves to emphasize the smallness of the matter.

Examples of bits and pieces

Dhara’s story is only told in bits and pieces through Servants of the Empire, but for me she was one of the most memorable characters.
Megan Crouse, Den of Geek!. February, 2018
Caught bits and pieces of CNN's Town Hall last night. From what I did see, it seemed like it got pretty heated. Also seemed like those state reps were saying a bunch of bullshit too
@Da1nOnlyCMart, February, 2018
Throughout the building, they meticulously worked around the bits and pieces of history, like the latches and handles that are easily 250 years old and were found on hand-built cabinets in the bedrooms.
Lisa Spear, The Recorder, February, 2018
SEE MORE EXAMPLES

Who uses bits and pieces?

Bits and pieces is widespread in the English language, used in speech and writing and featured in book, film, and song titles. However, British English often uses similar phrases, bits and bobs or bits and bats.

This is not meant to be a formal definition of bits and pieces like most terms we define on Dictionary.com, but is rather an informal word summary that hopefully touches upon the key aspects of the meaning and usage of bits and pieces that will help our users expand their word mastery.