What does bofa mean?

Bofa is a slang shortening of “both of,” and, in this colorful internet era, it’s generally followed by deez nuts. As in testicles. Bofa deez nuts is a popular online meme.

Where does bofa come from? 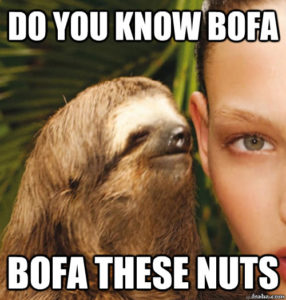 Bofa is a slang term that often precedes deez nuts, a figurative reference to testicles, used for the purpose of disrupting a conversation or pranking someone.

The use of deez nuts originates from the 1992 Dr. Dre album The Chronic, which contains the track “Deeez Nuuuts.” In the beginning of the song, a man and woman are having a conversation on the phone, when the man suddenly yells “Deez nuts!” This created what is now known as the deez nuts joke, which saw a spike in popularity when it was used by WelvenDaGreat on Instagram in 2015.

Bofa, or “both of” is a later addition to the canon of deez nuts jokes, and is of unknown origin. Bofa is not in the original “Deeez Nuuuts” song, and its usage predates WelvenDaGreat’s video. It’s possible that bofa might have been created to intentionally mislead people. If the person being pranked looks up bofa online, the top results will be links related to Bank of America.

Bank of America be jokin having their app named BofA like “Bofa deez nuts” pic.twitter.com/uyzozj3V0z

The US Presidential candidate Deez Nuts, who was actually a 15-year-old named Brady Olson, acknowledged in an interview with Rolling Stone that the name he chose for his protest candidacy was intended to be a reference to the bofa meme, which is another way to refer to the deez nuts prank.

Jake Tapper: "What would your Secret Service code name be?"

Though not the most sophisticated joke around, even the rich, famous, and noteworthy are not immune from getting bofa’d—of course there is a verbal form of getting pranked by this meme. The English evolutionary biologist, and ethologist Richard Dawkins is a public figure who was on the receiving end of a bofa prank in 2015 via Twitter.

@assbott BOFA DEEEEEEEZ NUTZ OWNED
@packman_jon, March 2017
Joshua emailed back for clarification... ‘In an ironic twist, am unfamiliar with BOFA.’ ...and got it: ‘Really? Well in that case, let me help you get familiar with BOFA DEEZ NUTS!’
Tim Marchman, “‘I Am Unfamiliar With BOFA’: Tom Tips Back,” Deadspin, May 25, 2016 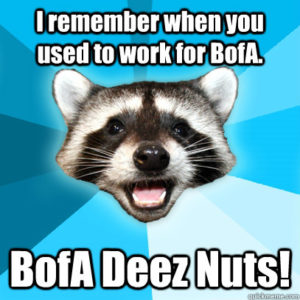 Quickmeme
The BOFA joke is juvenile, somewhat pathetic, dumb….and absolutely hilarious, mostly for the set up involved and because its victims seem so unable to use Google correctly in order to avoid being pwned.
Bee_tee_ess, “Bofa Deez: The Greatest Day in Juvenile Humor,” FlamingHotTakes, January 10, 2015
SEE MORE EXAMPLES

The success of a bofa joke depends upon a person’s unfamiliarity with what bofa means: for example, the prankster will ask a person, “Do you want to see bofa?” and when a person responds, asking what bofa is, the first person retorts “bofa deez nuts!” It can be used even more deceptively, such as when a person uses the lead-in, “I went to this great Italian restaurant last week, and they make great bofa.”

It’s seen as a sign of good humor if the person who has been bofa’d laughs, shrugs it off, or bofas someone themselves.

This is not meant to be a formal definition of bofa like most terms we define on Dictionary.com, but is rather an informal word summary that hopefully touches upon the key aspects of the meaning and usage of bofa that will help our users expand their word mastery.