What does bury the lede mean?

Bury the lede is an expression that means to fail to mention the most important or interesting part of a story or anecdote right at the beginning, and instead insert it at some other point in the telling, as if it weren’t that important.

Example: I’m sorry you had a bad cab ride, but wait—did you just say you got the job? Way to bury the lede!

The expression comes from journalism, in which the word lede (a jargon spelling of lead) refers to the introductory (lead) sentence or paragraph of a news story. In a hard news story, the lede typically summarizes the most important aspect(s) of the story (and tells what the article is about).

A person might accuse a journalist of burying the lede when the aspect of the story that the person considers most important is not included right at the beginning, but is instead mentioned later (in a place typically reserved for secondary facts).

In everyday conversation, people sometimes intentionally build up suspense by revealing the big news last—that’s not burying the lede. Accusing someone of burying the lede typically implies that they are simply a bad storyteller or that they don’t realize the importance of a particular part of the story they’re telling. Still, a person might be said to have buried the lede after intentionally trying to downplay information that might be bad for them—by burying it between other parts of their story, for example.

Where does bury the lede come from? 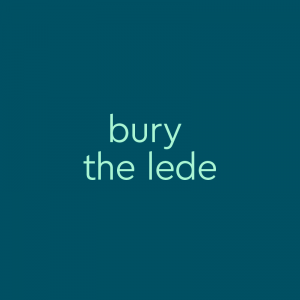 The expression bury the lede comes from journalism. The word lede has been used in journalism since at least the 1950s to refer to the introduction of a news article, often one that states the most important part of the story. It is an altered spelling of the word lead, in the sense of “something that comes first.” The altered spelling was adopted to avoid confusion with the word lead (as in the metal), which was used in the context of printing to refer to metal strips used in typesetting.

Examples of bury the lede

Let's not bury the lede: Almost one in three Americans have a favorable opinion of Nickelback?!
@mpoindc, January 8, 2013
Johnson, never one to bury the lede, summarized as only he could the Warriors' last-minute loss to the Los Angeles Lakers in Wednesday's play-in game.
Marcus White, NBC Sports, May 20, 2021

Who uses bury the lede?

The expression bury the lede began as journalism jargon, and it is still used in that context, but it has also entered mainstream use.

I'm gonna write an article about how a lot of websites bury the lede in order to serve up more ads, but I'm not going to get to the point until I'm eight paragraphs in.

Any recap of last night that doesn’t start with a presidential candidate in Indiana calling a rim a “basketball ring” has buried the lede.

Y’all over here burying the lede: Giannis drinking half lemonade and half sprites like a true maniac. There’s no way he was losing this year.

This is not meant to be a formal definition of bury the lede like most terms we define on Dictionary.com, but is rather an informal word summary that hopefully touches upon the key aspects of the meaning and usage of bury the lede that will help our users expand their word mastery.