What does bust a nut mean?

No nutcracker necessary. The expression bust a nut variously means “to be excited about something,” “to lose your temper,” “to work hard,” or … “to ejaculate or orgasm,”

Where does bust a nut come from? 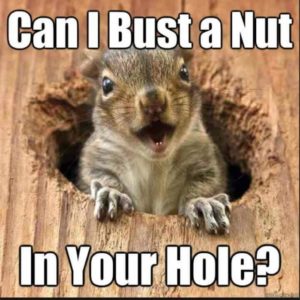 The expression bust a nut first surfaced in the 1930s. Nuts is a slang term for “testicles” that has been around since the mid-19th century. The term bust a nut implies that something explosive is going on with one’s testicles—metaphorically, we hope.

Originally, to bust a nut meant “to ejaculate” but also”to work hard,” perhaps a variation of a similar expression bust your conk, meaning “to work hard at a task.”

Use of bust a nut to mean “ejaculate” was popular in 1970s Blaxploitation pornography, although it’s likely that the expression was in oral use amongst black Americans prior.

By 1982, the expression bust a nut had taken on the meaning of “losing one’s temper” or “flying off the handle.” The shift in meaning can be understood if you think that one is really excited, shall we say, when ejaculating, similar to how you “lose your mind” when you’re angry.

Don’t need to know how to spell to bust a nut https://t.co/8MKJZ73RFi

In the 1980s, the expression bust a nut for “ejaculate” was made more popular through its frequent use in rap and hip-hop songs.

By the 1990s, bust a nut had taken on the meaning of being excited about something, often in an overly enthusiastic way—because, you know, ejaculation. The 1995 cult classic film Kids includes the line: “He’s pretty crazy, he’ll do whatever to bust a nut.”

Examples of bust a nut

I'm sorry you're accent is heavy. Jesus don't bust a nut bro.
@arturojovann, June 2012
Of course, if a man loves you, he will make sure that you both enjoy and he will try his best to pleasure you. However, there's another bunch that's really just there to bust a nut.
Nyakinyua Kibugi, Pulse, August 2018 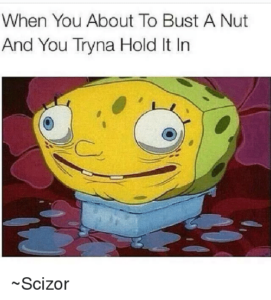 Who uses bust a nut?

Bust a nut continues to be used both for “ejaculate” and “work hard,” but its sexual sense has been the prevailing definition in the 21st century. Use it cautiously, as many find it vulgar.

The orgasmic bust a nut is often found in pornography or sexually explicit discourse, especially hip-hop music. While often used for male ejaculation, bust a nut can be used of any orgasm.

Tired of busting my nuts for crusty fools.

You can also bust a nut just by being really excited about something.

Don’t need to know how to spell to bust a nut https://t.co/8MKJZ73RFi

In some contexts, bust a nut is used to mean “get angry” as in My dad was gonna bust a nut when he saw we’d taken his truck.

if i see one more pic of a straight girl kissing another straight girl at pride to be “cute” and “quirky” i will bust an angry nut !!! i swear y’all want the hands 🤮🤬🙄

As noted, bust a nut still mean “to work hard” as in The boys busted a nut getting the roof done, similar to busting your balls.

And if you are busting someone’s nuts, it means you are giving them a hard time or making them work extremely hard.

This is not meant to be a formal definition of bust a nut like most terms we define on Dictionary.com, but is rather an informal word summary that hopefully touches upon the key aspects of the meaning and usage of bust a nut that will help our users expand their word mastery.