What does cheeky Nando's mean?

In British slang, a cheeky Nando’s means popping in for a bite at the chicken restaurant Nando’s, often with your mates after you’ve had a couple of pints and are having a good time.

Where does cheeky Nando’s come from? 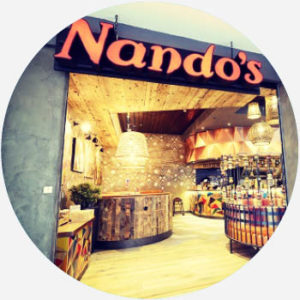 To understand a cheeky Nando’s, here’s a brief education in some UK slang and cultural references.

First, cheeky. Based on earlier meanings of “rash” or “impudent,” cheeky is slang for “indulgent” or “impulsive,” especially with food and drink. The term is seen in the late 1980s and is often used when talking about adult beverages (e.g., I really have to get home, but what the hell, one drink won’t hurt. Let’s grab a cheeky pint.).

Second, Nando’s. Founded in South Africa in 1987, Nando’s is a restaurant chain specializing in spicy grilled chicken with locations around the world. Nando’s is especially popular in the UK.

British people joke about cheeky Nando’s with respect to lad culture—a kind of UK counterpart to the US frat bro. Think heavy drinking, macho displays, and sexual aggression. The experience of a cheeky Nando’s, then, is like going to Chipotle with your bros after everyone’s had a few drinks—the jokes are rolling, the night’s ahead.

References to cheeky Nando’s made some waves on British corners of the internet in the early 2010s, apparently starting with a 2011 novetly track “Cheeky Nando’s” by Buzy Ray. A 2014 tweet also got attention. It featured an image of jangle-pop frontman Morrissey making an OK sign with the comment: “When your nandos is extra cheeky.”

When your Nandos is extra cheeky pic.twitter.com/h4BuzWDkG0

This inspired a meme, the comment applied to other pictures of other notable Brits making OK signs. 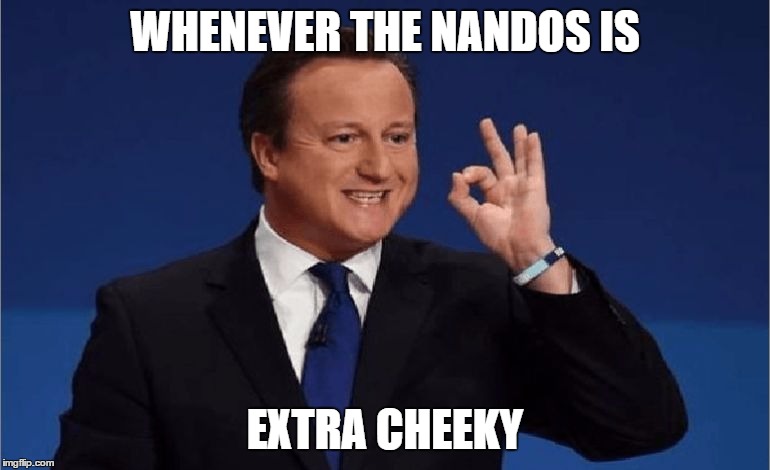 Cheeky Nando’s went viral, though, in 2015 when Americans couldn’t handle being left out of the joke. British internet users trolled Americans who were desperately trying to decipher cheeky Nando’s. The Brits explanations had even more British slang. BuzzFeed, Cosmopolitan, and Telegraph UK all notably commented on the meme throughout 2015. 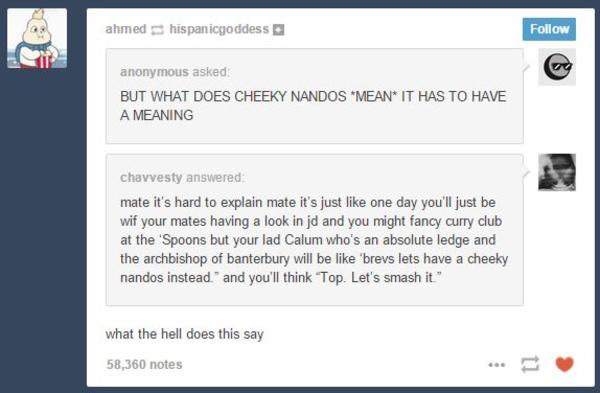 okay so registration opens at 2pm, i get there at around 11 so who fancys a cheeky nandos lunch??
@regalarrows, June, 2018
interests: vodka redbull, a "cheeky" nandos & dancing around to house music. I have officially found the most generic male in the north east
@digginforrubies, July, 2014
ou know what it's like when you get that cheeky Nandos craving - nothing is going to keep you from lashings of medium sauce, crispy chicken skin and the Holy Grail that is peri chips. When you and the lads get together for a Nandos (or a 'Scrandos' as it's nicknamed in the North East of England), things get wild.
Hollie-Anne Brooks, We The Unicorns, June, 2017
SEE MORE EXAMPLES

As a meme, cheeky Nando’s had its heyday in 2015, but people in the UK still refer to having a cheeky Nando’s in everyday speech and writing. The term has generalized to refer to any sort of spontaneous, feel-good bite to eat at a Nando’s, though its use still carries some of its meme undertones.

Cheeky Nando’s with this cheeky little rascal!!! Thanks to @NandosUK Llanelli for the feed! 💪💪😎😎😎😜 pic.twitter.com/3lb7PkRgWr

This is not meant to be a formal definition of cheeky Nando’s like most terms we define on Dictionary.com, but is rather an informal word summary that hopefully touches upon the key aspects of the meaning and usage of cheeky Nando’s that will help our users expand their word mastery.