What does Cheetle mean?

1     Cheetle is the brand name for the powdery residue that gets on your fingertips while eating the savory cheese snack, Cheetos®.

Where does Cheetle come from? 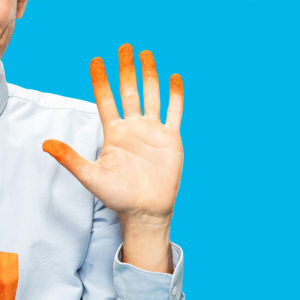 Cheetos is a famous brand of puffed, cheese-flavored, cornmeal-based snacks created by Charles Elmer Doolin around the 1950s.

If you have ever reached into a bag of any of the many varieties of Cheetos, you would know that this snack packs a lot of flavor. You’ll also know that they can leave a lot of it behind on the snacker’s fingertips. This notorious, yet scrumptious, bright-orange Cheetos dust is so recognizable that it earned its own name: Cheetle®.

The word Cheetle is based, of course, on the brand name Cheetos, itself apparently a blend of cheese and Doolin’s first creation, Fritos. As for that –le in Cheetle? It is likely based on the diminutive suffix –le, as in the word little, suggesting an affectionate smallness (though, finger-lickers of said Cheetle will note, not in taste).

An earlier form of Cheetle, spelled cheedle, was found to be one of the sniglets (fun coinages) of comedian Rich Hall in the 1980s, which he defined as “the residue left on one’s fingertips after consuming a bag of Cheetos.” The first known proper use of Cheetle, as such, was found in a finger-painting online computer game as early as 2004 and 2005, after which the name was first popularly defined on Urban Dictionary.

While some may think Cheetle dust would be a nuisance (and a hazard for wearers of white shirts), Cheetos brand has long embraced its Cheetle phenomenon. The Twitter account for its mascot, Chester Cheetah, has tweeted about Cheetle since 2015, and Cheetos has incorporated it into other advertising and marketing.

Cheetle is dust that sticks to your fingers when eating Cheetos. More magical than pixie dust. Show me your #Cheetle. pic.twitter.com/SDqFPE6zFk

Cheetos even includes Cheetle on its website’s “About” page: “CHEETOS® snacks are the much-loved cheesy treats that are fun for everyone! You just can’t eat a CHEETOS® snack without licking the signature “Cheetle” off your fingertips. And wherever the CHEETOS® brand and CHESTER CHEETAH® go, cheesy smiles are sure to follow.”

Cheetle has become such a defining part of the Cheetos experience that it has trended on social media and been featured on such TV shows as Saturday Night Live and The Ellen Show, confirming its place in popular culture.

The Touch ID on my phone isn't working due to the [C]heetle on my fingers. #firstworldproblems

Cheetos has created a fashion line that turns the season’s hot styles into functional items that save wearers’ fingers from Cheetle, a.k.a. the official name for the dead orange-gunky giveaway that you’ve been eating the snack.

Now, many people put Cheetle, as an actual substance, to an array of creative uses in their lives, from marking their place in books to cleverly avoiding unsolicited high-fives from strangers.

But as a brand name, Cheetle is generally used in a playful or humorous way. Many people note, in surprise or delight, that there is an actual name for the delicious orange dust that only comes from Cheetos.

Hi guys. Today I learned that the powder that sticks to your fingers after you eat Cheetos is called cheetle. Thank you for listening.

Others use Cheetle in joking about how they savor Cheetos dust.

that is just an added benefit of the Cheetos Puffs Mailing Method TM. once the package is delivered, you get the exciting opportunity to lick all the cheetos dust (known to cheetos scientists as "cheetle") off of the contents of your package. very tasty :)

Cheetle is still Cheetle, though, when it falls to the bottom of a bag of Cheetos and doesn’t stick to someone’s fingers.

Remember to shake your bag for maximum Cheetle extraction.

This is not meant to be a formal definition of Cheetle like most terms we define on Dictionary.com, but is rather an informal word summary that hopefully touches upon the key aspects of the meaning and usage of Cheetle that will help our users expand their word mastery.