What does Cleverbot mean?

Cleverbot is the name of an online artificial intelligence technology that chats with real people in a simulation of human conversation, making its replies by drawing on its database of previous conversations.

Where does Cleverbot come from? 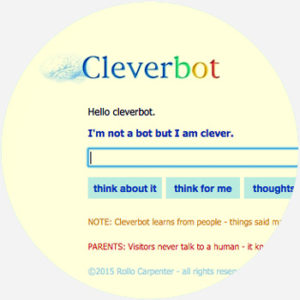 In 1997, artificial intelligence developer Rollo Carpenter debuted an early chatbot. Then called Jabberwacky, his program would later evolve into its current incarnation, Cleverbot.

While chatbot programs in which computers conduct chats with human users have existed in some form or another for decades, what makes Cleverbot unique is its way of gaining information; It was put out in the world with no input or restrictions, making its intelligence crowdsourced.

Basically, Cleverbot only learns new information like a human being does: through experience. It began very primitively, but as people conversed with Cleverbot over the years, it has continually learned new ideas and vocabulary, thus becoming more intelligent and human-like in its conversation abilities. Every time that someone talks to Cleverbot, it stores the conversation in its database, then it retrieves these chats to create future replies to questions.

When Cleverbot is asked a question—say, “Cleverbot, why is the sky blue?”—Cleverbot looks over the conversations it’s had with that same user, determines context within the chat, and then scours its database for what it thinks is the best reply. This indexing ability results in less random and erratic replies than seen in many other online chatbots.

By 2016, Cleverbot had nearly 280 million interactions to draw from for its conversations. Needless to say, Cleverbot has gotten far more intelligent than it was since first going online in 1997. In fact, some might say that Cleverbot’s intelligence is, well, human. At the 2011 Techniche festival in Guwahati, India, Cleverbot competed in a Turing-style test—and passed. The Turing test was devised in 1950 by legendary codebreaker Alan Turing based on the idea that if a machine, in conversation, could convince over 30% of human participants that it was human, then it meant that the machine’s thinking was indistinguishable from that of a human being. At this 2011 festival, Cleverbot was perceived to be human by 59.3% of the judges, which is even more impressive in light of the fact that the average human competitors only got 63.3%. However, there’s debate about whether Cleverbot’s victory truly counts as a success, since the program converses by cycling a database of prior human conversations, which some argue is a different process than if it were forming thoughts on its own.

“Cleverbot i hate you”
@emilyslivers Twitter (March 17, 2017)
“Cleverbot has learned to chat from the millions of conversations it’s had with real people. These are some incredibly important and slightly worrying lessons that you can learn from talking with Cleverbot…”
Jack Shepherd, “26 Cleverbot Conversations That Are Guaranteed To Make You Laugh,” BuzzFeed (February 27, 2014)
“Last week, an artificial intelligence computer named Cleverbot stunned the world with a stellar performance on the Turing Test—an IQ test of sorts for 'chatbots,' or conversational robots. Cleverbot, it seems, can carry on a conversation as well as any human can.”
Natalie Wolchover, “How the Cleverbot computer chats like a human,” NBC News (September 7, 2011)
SEE MORE EXAMPLES

Because everything that Cleverbot can say is drawn from its millions of real human conversations, it lets users accesses a wealth of unique information, popular memes, in-jokes, and references, compiled from everything that people have fed into it previously. Since many who chat with Cleverbot tend to do so for their own amusement, Cleverbot’s personality can sometimes be illogical or rude. On the other hand, it can speak to complex subjects like physics with ease.

The most common internet meme that has resulted from Cleverbot—not counting the endless memes now embedded inside its database—is that users often take screenshots of their conversations with Cleverbot and post these screenshots on social media. The pictures tend to depict conversations that are humorous, deranged, bizarre, sexual, or sometimes scarily lifelike. Cleverbot can recite lyrics from songs, correct people’s mistakes, make lewd gestures, or offer support. In 2014, Buzzfeed referred to Cleverbot as the most hilarious robot on the internet.

This is not meant to be a formal definition of Cleverbot like most terms we define on Dictionary.com, but is rather an informal word summary that hopefully touches upon the key aspects of the meaning and usage of Cleverbot that will help our users expand their word mastery.