What does coger mean?

Literally meaning “to grab or “to take” in Spanish, coger is used as a Latin American vulgar slang term for “to fuck.”

Where does coger come from? 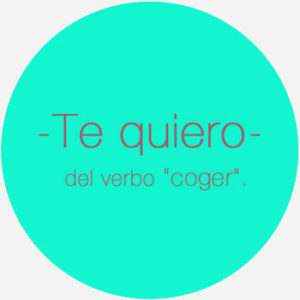 Outside of its colloquial use, coger is an everyday verb that means “to grab, take, pick up.” It can be used in a variety of contexts, from taking the bus (coger el autobús) to picking an item up from the floor. As a slang word, however, it is the English language equivalent of “to fuck or screw” strictly in sexual contexts. As many Latin American slang words are regional, coger is primarily used in South America, but has seen wider use across Latin America.

A rise in the slang term may be due to reggaeton, a music genre which began in Puerto Rico during the 1990s. Reggaeton fuses influences from hip-hop, rap, and traditional Caribbean music. A very masculine scene, reggaeton features themes that are sexually explicit in nature, using different colloquialisms, including coger, to describe having sex. Some popular reggaeton crossover artists that have notably used coger include Maluma, Bad Bunny, and Daddy Yankee.

While coger is fairly well-known as slang for “to fuck” in Latin America, there are many regional variants (e.g., pichar in Colombia or chingar in Mexico). In its slang form, coger is conjugated normally.

Note that coger is not often used to seduce a partner, often seen as too vulgar and offensive. Outside of the likes of reggaeton songs, coger can be heard among friends, for instance, boasting about sexual conquests.

This is not meant to be a formal definition of coger like most terms we define on Dictionary.com, but is rather an informal word summary that hopefully touches upon the key aspects of the meaning and usage of coger that will help our users expand their word mastery.