Cock-blocking is the action of preventing someone (usually a man) from having sex by intentionally or unintentionally stopping (blocking) someone else’s cock from reaching its intended destination. This behavior could be driven by jealousy, competition, genuine concern for one of the people involved, or simple obliviousness.

ballbusting, blue balls, if you can't handle me at my worst, I'm bored, Florence Nightingale Effect

Where does cock-block come from? 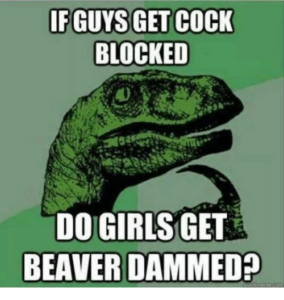 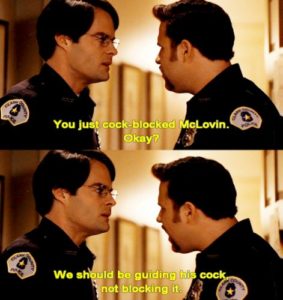 i.pinimg.com
Guys have been complaining about getting cock-blocked since at least the 1970s. In 1972, linguist Edith Folb recorded young black men in Los Angeles using the term, describing it as “to mess up a dude’s action.” Folb noted that the cock-blocker didn’t even have to be interested in the woman that the blockee was pursuing.

In 1990, Run DMC and Kid Rock both rapped about people trying to cock-block them. By the next year, the term was common enough to show up in an English-to-Italian dictionary of slang.

For a guy to cock-block another guy is generally considered bad form. The action is condemned in a 2010s book of “Man Rules” called The ComMANdments. A writer in 1994 described a hand signal for committing the foul, like the incomplete pass signal from football but in front of his crotch.

Women also like to have sex, in case you didn’t know, and find interference just as annoying. Some women may still call the action a cock-block, in this case being prevented from receiving the cock. Many other names have been suggested for the female equivalent, which is also useful for pairings that don’t involve a cock. Some examples include: clam jam, twat swat, box out, or beaver dam.

In 2015, a comedy sketch on Inside Amy Schumer featured a humanoid rooster (get it?), a personified cock block who walks around a bar ruining guys’ chances with women. The cock’s over-the-top personality seems to paint the whole idea of cock-blocking as absurd.

Riffing on the same cock/rooster idea, in the 2017 board game Cock Block players are roosters trying to score “chicks” (actually hens) while blocking each other.

The 2018 comedy movie Blockers features three girls trying to lose their virginity on prom night while their parents try to block them. In case the title wasn’t obvious enough, the posters featured the silhouette of a rooster.

“Reince is a fucking paranoid schizophrenic, a paranoiac,” Scaramucci said. He channelled Priebus as he spoke: “ ‘Oh, Bill Shine is coming in. Let me leak the fucking thing and see if I can cock-block these people the way I cock-blocked Scaramucci for six months.’”
Anthony Scaramucci quoted by Ryan Lizza, The New Yorker, July 2017

The desire to not be seen as a cock-block may have unintended consequences. A 2011 paper on sexual violence noted that social norms around cock-blocking may make male bystanders less likely to intervene in potentially abusive situations. An anti-sexual assault group called the Girl Code Movement (à la Man Rules or Bro Code), offers sexual assault prevention tips under the heading “Cock Block Tips.”

Of course, cock blocking people who do mutually want to have consensual sex is still pretty annoying. Due to their innocence, kids are especially good at unintentionally doing this to their parents. Women’s Health even published a whole article of stories from parents who got cock-blocked by their kids. And, someone even wrote a 2016 faux-children’s book about it called Nobody Likes a Cockblock.

Cock-blocking can also be metaphorical, a colorful or humorous way to say “interfere.” In his 2012 song “Ten Thousand Hours,” for example, Macklemore hopes that “the soundman doesn’t cockblock the drums.”

Big boobs are the biggest cockblock for cute clothes

This is not meant to be a formal definition of cock-block like most terms we define on Dictionary.com, but is rather an informal word summary that hopefully touches upon the key aspects of the meaning and usage of cock-block that will help our users expand their word mastery.