or concern trolling or concern-troll

What does concern troll mean?

Concern trolling involves someone opposing an idea or viewpoint, yet acting like they’re an advocate for the cause. A concern troll offers undermining criticisms under the guise of concern. Their goal is to sabotage the cause being discussed, and to inspire doubt among group members. This occurs in groups rallied around a particular issue, especially in political parties, and the goal of concern trolling is to cause dissent within a community.

Where does concern troll come from? 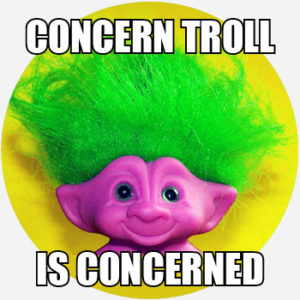 The term concern troll has been around since at least 2005, where it evolved from “concerned” troll, where the quotation marks show just how unconcerned this kind of internet troll really is. It appeared in forums, along with its verbal variant, concern-troll. The term concern troll became more popular outside of forums around 2006. An early use appeared in an article in Daily Kos on March 3, 2006. It wasn’t explicitly defined, yet other articles using the same term began to surface soon after. It became popular in political circles among Democrats and Republicans alike. In December 2006, Time finally defined the term along with other variants of internet trolls.

“The new #DNCChair's job will be to help Soros direct his astroturf protests to concern troll moderate Republicans into doing nothing.”
Patriot @patriot17761980 Twitter (February 25, 2017)
“Was a little surprised this afternoon by a concern troll advocating the need for more fat shaming in order to 'save the children'. Huh.”
Cameo Wood @Cannes @cameo Twitter (April 5, 2017)
“In reality they are a critic, or flat out someone who wishes harm upon the transgender community. The ultimate goal of concern troll is usually to keep transgender people marginalized, mistreated and without legal protections.”
Brynn Tannehill, “How to Spot Anti-Trans Concern Trolls,” The Huffington Post (August 29, 2015 (updated August 29, 2016))
SEE MORE EXAMPLES

A concern troll will make statements with the intent to cause discord in a community, while pretending they’re doing it out of concern for the greater movement. Concern trolling is a lot like playing devil’s advocate in online debates, but as a tactic to infiltrate movements or causes and weaken them.

A concern troll might say that certain people will paint the group negatively overall if they engage in certain tactics, such as becoming emotional or aggressive about an issue. Or, they might attempt to say that both sides of an issue are just as bad as each other. They might even say that other issues are more important than the issues that are being discussed by a given group. In reality, this is to justify insidious criticism and promote in-group discord.

Outside of political contexts, concern trolls hassle the personal lives of individuals. Concern trolls are the types of people who, for example, try to coax otherwise healthy fat people into dieting, claiming it’s because they worry for their health. But in reality, it’s because the concern troll doesn’t like fat people. These people take it upon themselves to argue against something that might promote a person’s well-being, such as a gender-affirming transition, while citing statistics of regret among transitioning individuals to dissuade that person from taking action.

A concern troll never calls themselves by this term. Rather, they’re accused of being one by the group they’re antagonizing once the group recognizes what’s going on. A concern troll is also very different from a person who actually is an ally to the cause and has real concerns.

This is not meant to be a formal definition of concern troll like most terms we define on Dictionary.com, but is rather an informal word summary that hopefully touches upon the key aspects of the meaning and usage of concern troll that will help our users expand their word mastery.