What does copypasta mean?

The term copypasta refers to a block of text which is repeatedly copied and pasted by individuals over various online forums and social media sites. It is often used interchangeably with “copy and paste.”

Where does copypasta come from? 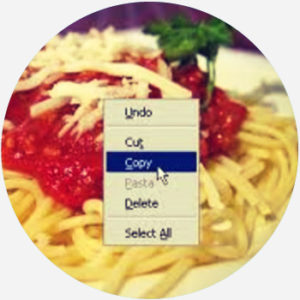 Copypasta is a shortening of the ubiquitous two-part keyboard action “copy and paste.” The concept of cutting, copying, and pasting text is credited to computer scientist Larry Tesler, who worked at Xerox PARC. He began implementing the practice of copying text from a computer’s internal memory and pasting it elsewhere in the mid-1970s. The verbs cut, copy, and paste were inspired by older practices of manuscript editing when one had to manually cut text and paste it on a new page.

The internet-coined term copypasta first appeared on Urban Dictionary on April 20, 2006. The concept of copy and pasting a block of text over and over again is related to the popular 1990s practice of sending chain mail (either in the form of email or snail mail) and is sometimes compared to spam for its unsolicited and sometimes annoyingly repetitive nature.

Many copypastas are fictional stories, although this is not a mandatory part of the concept. Some of the most well-known and popular copypastas include Katy t3h PeNgU1N oF d00m (Katy the Penguin of Doom) and the Navy Seal copypasta (also known as the Marine Copypasta, Internet Tough Guy Copypasta, and Gorilla Warfare Copypasta).

The creepypasta genre of online horror stories is a play on copypasta, as both are known for their viral nature.

“it's half of a joke from BoJack Horseman. He might copypasta the second half to your reply after a little while. Dunno.”
@LupaVoruum Twitter (March 25, 2017)
“The mods for r/copypasta are going to start removing copypasta we deem as low effort. What is low effort you say? Copypasta that takes advantage of u/Cummybot2000, copypasta that is 6 words long, copypasta that 'replaces every other word with anal' etc. These posts will be removed and could result in a temporary ban!”
r/copypasta mods Reddit (December 29, 2016)
“‘Anti-Racist Is Code for Anti-White’...has proliferated online as a piece of white supremacist copypasta—text that’s obsessively copied and pasted across internet forums.”
Amanda Hess, “For the Alt-Right, the Message Is in the Punctuation,” The New York Times (June 10, 2016)
SEE MORE EXAMPLES

Copypasta can be used as a noun and a verb. Both copypasta and copypastas are acceptable as plural nouns.

This is not meant to be a formal definition of copypasta like most terms we define on Dictionary.com, but is rather an informal word summary that hopefully touches upon the key aspects of the meaning and usage of copypasta that will help our users expand their word mastery.