What does dog-pile mean?

A dog-pile is formed when a group of people jump on each other, often done as a children’s game or in athletic celebrations.

To dog-pile someone is to gang up on a person in mass criticism.

Where does dog-pile come from? 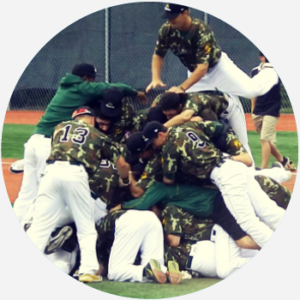 A simple compound of dog and pile, a dog-pile described a tackling mound of American football players as early as 1921. An earlier form, found in the 1880s, was a pig pile. The expression is apparently inspired by the way dogs seem to pile on each other when feeding or playing.

In 1935, a letter to the amateur radio magazine QST mentioned dog-pile as the “youthful antics” of a game where children jump on top of each other, vying to be on top. The game often begins with one person throwing themselves on the ground and yelling “Dogpile!”, prompting others to leap on and wrestle to the top. 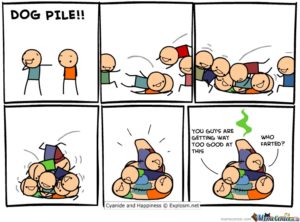 By the 1940s, dog-pile was being used as a verb to describe the action of forming a dog-pile. The term also described when a group of people metaphorically pile on one person, teaming up to pick on or criticize the individual.

In the mid-1990s, the online search engine Dogpile launched, known for aggregating the results of multiple search engines, a kind of technological dog-pile.

I know a lot of people are gonna dogpile me but I've gotta say it: I'm anti-histamine.
@MelodyBurst, April, 2018
The ten year olds I coach just had a dogpile on the field because they were 0-17 and tied a tournament game. It was their first "not loss"
@ClaytonTorok, June, 2017
David Purcey couldn't breathe...And he never felt more alive...Buried alive, that is. Because at that moment, Purcey was at the bottom of a mass of humanity known as the baseball dogpile.
Carter Stickland, NewsOK, June, 2004
SEE MORE EXAMPLES

Outside of the children’s game, dog-pile is often used to describe when American football players jump on a loose ball or a tackle a player. The term also sees use when a team wins an important game. Baseball players may dog-pile a pitcher after striking out the last batter, for example, to win the World Series.

On social media, dog-pile is commonly used when many people gang up on a person for a controversial tweet (e.g., Twitter dog-piled the TV host after he tweeted out a sexist statement.) The term implies a sudden and chaotic mob, often with undertones that the mass criticism is undeserved. 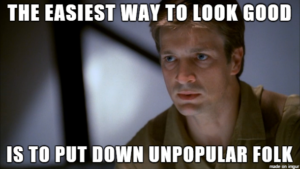 This is not meant to be a formal definition of dog-pile like most terms we define on Dictionary.com, but is rather an informal word summary that hopefully touches upon the key aspects of the meaning and usage of dog-pile that will help our users expand their word mastery.