Dogecoin is a form of digital currency featuring the doge dog, a popular internet meme, as its mascot. Wow, so currency!

Where does Dogecoin come from? 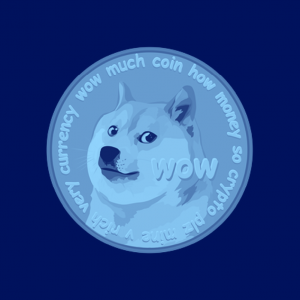 Dogecoin features the image of a Shiba Inu dog named Kabosu giving a curious sidelong glance. This picture is often referred to as the doge meme, popular online in the early 2010s. The meme displays a picture of Kabosu’s famed expression along with short, ungrammatical captions in Comic Sans.

I adapted the doge meme into a more relevant context for my life right now… it really speaks to me. #AcademicTwitter #Academia #gradschool #doge pic.twitter.com/B4ioBiBNfH

Dogecoin is a digital currency like Bitcoin and other cryptocurrencies called altcoins (hence the -coin in dogecoin). It’s open-source, peer-to-peer, and decentralized. Dogecoin has been accepted at some online retailers and sent to people anonymously through social media.

Dogecoin first emerged in 2013 as a satirical tweet by Jackson Palmer, an Adobe Systems marketer, during the height of the doge meme’s popularity. After being encouraged by friends to make the Dogecoin joke a reality, he teamed up with programmer Billy Markus, who wanted to create a form of currency more accessible and marketable than Bitcoin.

The new cryptocurrency exploded in popularity, by 2014 becoming the fifth largest cryptocurrency in use. Just a few short months after its inception, “Dogecon,” a convention for Dogecoin enthusiasts, was held in San Francisco.

Why is Dogecoin trending?

Dogecoin made headlines in January 2021 after it became involved in a stock market “war” between retail investors and hedge funds. The subreddit /r/WallStreetBets had been encouraging users to invest in stocks from companies such as GameStop and AMC Entertainment that were the target of Wall Street short sellers. In response, the subreddit /r/SatoshiStreetBets went along with the idea and encouraged users to invest heavily in Dogecoin, which caused the value of Dogecoin to increase over 900% in 24 hours. This surge was also fueled by influential tech CEO and billionaire Elon Musk, who had seemingly tweeted in support of the coin.

A user of /r/SatoshiStreetBets going by “ChristmasChan” claimed Dogecoin “was chosen specifically because it is a joke coin.” The user also stated Dogecoin was being purchased as part of a movement opposed to “suits” from Wall Street.

can you draw lulu with a tiny slotted on the 3rd belt on the left thanks your payment is 2 dogecoin
@mopthelop, May 7, 2017
Ten doge coins to the person who correctly guesses what this photo depicts.
wordsareweapons1, Instagram, January 2017
Dogecoin has been around for less than a month. In that time, the value of all dogecoins in existence has skyrockted [sic] from zero to more than $8 million.
Timothy B. Lee, “Dogecoins and Litecoins and Peercoins oh my: What you need to know about Bitcoin alternatives,” The Washington Post, December 26, 2013
SEE MORE EXAMPLES

As with the original doge meme, the pronunciation of Dogecoin is up for debate. According to Dogecoin cofounder Jackson Palmer, the correct pronunciation is [ dohj koin ], based on how it was pronounced in the Homestar Runner skit that inspired the doge meme’s name.

The correct symbol for Dogecoin currency is either Ð or D. For example, “Tammy has Ð300.” Its abbreviation for conversions is XDG, so it could be said that “2,100 in XDG is equivalent to ___ in USD,” with the blank number depending on current conversion rates. While some cryptocurrencies such as Bitcoin enjoy a high conversion rate to popular mainstream currencies, Dogecoin is usually worth much less in its exchange rate.

The Dogecoin community has used the currency to raise charity donations of up to $30,000 for causes such as sending service dogs to families with children.

Although Dogecoin typically has a historically low value (worth fractions of a penny), it has enjoyed a longstanding popularity rarely earned by cryptocurrencies.

This is not meant to be a formal definition of Dogecoin like most terms we define on Dictionary.com, but is rather an informal word summary that hopefully touches upon the key aspects of the meaning and usage of Dogecoin that will help our users expand their word mastery.