What does double down mean?

To double down is take a further risk in a situation or passionately re-commit one’s efforts to a cause or course of action.

Where does double down come from? 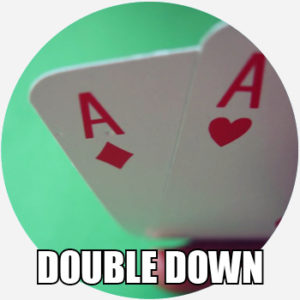 In its original context of the card game blackjack, double down describes a strategy wherein a player who is confident in their hand chooses to double their bid. The phrase is found in a book on card-playing by noted magician John Scarne in 1949. By at least the 1990s, the gambling sense of double down extended as a metaphor to a more general sense of “engaging in risky behavior.”

Double down started evolving in the 2000–10s away from “taking risks” toward an “impassioned commitment to a cause.” The verb phrase saw an extreme peak in Google trends in April 2010. In November of that year, AOL.com declared double down its “buzzword of the week,” noting that the term had been “a popular boardroom buzzword” before beginning to spread through politics, communications, and media. At this time, it seemed to be used synonymously with “to work twice as hard.”

Perhaps picking up on this, KFC introduced in 2010 its Double Down sandwich. The name is a tongue-in-cheek nod to the outrageousness of such a food item. Double down has also developed special associations in the tech sector. In 2012, The Verge, notably, reported in their own examination of the phrase that doubling down had “become the go-to phrase for tech CEOs when they want to allay fears that their company is flagging,” dubbing it “the most meaningless phrase in tech.”

Examples of double down

On Tuesday Night, Trump Will Double Down on His Broken Promises
Katrina vanden Huevel, thenation.com, February, 2018
Love it when an artist gets gently told that “trap” is a shitty thing to say and then they double down by saying it has nothing to do with them
@MadokaMeowgica, February, 2018
'We don't see positive surprises of this magnitude very often — expect us to double down.' The CEO failed to explain exactly what the company's projections for Alexa were, and more importantly, what he meant by 'double down.'
Jeff Bezos, quoted by Carl Valesco, techtimes.com, February, 2018
SEE MORE EXAMPLES

Who uses double down?

Outside of gambling, double down is often used by politicians, business leaders, and media outlets to describe approaching some problem with more focus, energy, and resources, especially when that tactic is seen as ill-advised.

On social media, double down is used more loosely to express something or someone going twice as hard at something. The surge in popularity of the phrase in the 2010s earned it a status as a cliché in mainstream contexts, especially in news headlines.

In 2012, The Christian Science Monitor examined President Barack Obama’s use of the idiom when he said in his third State of the Union address, “At a time when other countries are doubling down on education, tight budgets have forced states to lay off thousands of teachers.” In the article, writer Ruth Walker concluded that the phrase Obama may have been searching for was something akin to ‘redoubling efforts’ rather than the original gambling definition of taking a risk for twice the yield.

This is not meant to be a formal definition of double down like most terms we define on Dictionary.com, but is rather an informal word summary that hopefully touches upon the key aspects of the meaning and usage of double down that will help our users expand their word mastery.