What does duff mean?

Standing for designated ugly fat friend, duff is a rude, though often humorous term people use for that one friend who makes you look better.

Where does duff come from? 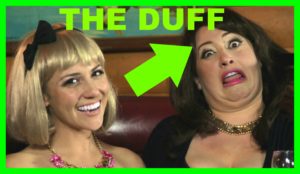 Entered on Urban Dictionary in 2003, duff is short for designated ugly fat friend. It’s a new term for an ancient practice—using a perceived less attractive person to make you look better. Humans.

While duff is no doubt shallow and mean, it also apparently has some scientific basis. A 2016 University of London psychology study revealed that being around an ugly friend does, in fact, does make you look better. Scientists.

Duff made its way into popular culture in the 2015 comedy film The DUFF, based on a 2011 novel of the same name written by Kody Keplinger when she was only 17. Set in a suburban Atlanta high school, The DUFF centers around Bianca, who tries to reinvent herself after discovering that her peers consider her the duff of her friend group. 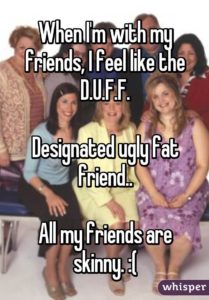 Whisper
Wesley is the dashing high school football star who struggles in school and is just insensitive enough to tell Bianca what no one else will: she’s a DUFF.
Josh Terry, The Desert News, February 2015
SEE MORE EXAMPLES

When found on social media, duff is usually used by people declaring or complaining that they are one, to varying degrees of sincerity and irony. We could all use a little love. So could actor Hillary Duff … coincidence.

it’s sad being the DUFF out of ur pals

My friends are so pretty being the duff is so hard

Pretty sure that I’m the duff of my friend group 😂

Duff, otherwise, is an occasional, slang term used more humorously for the general phenomenon of using one’s friends as props. Oh, the vanity. Oh yea, calling someone a duff is, no doubt, certainly a fast-track to losing that person as a friend.

This is not meant to be a formal definition of duff like most terms we define on Dictionary.com, but is rather an informal word summary that hopefully touches upon the key aspects of the meaning and usage of duff that will help our users expand their word mastery.