What does ear hustler mean?

An ear hustler is slang for  a “gossiper” or “eavesdropper,” especially those seeking to leverage whatever information they overhear to their advantage.

Where does ear hustler come from? 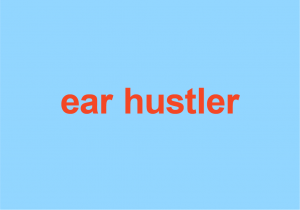 Ear hustle appears as early as the 1990s in Black and prison slang. Ear, of course, refers to hearing, and hustle, here, is “to work something to one’s advantage.”

An ear hustler, by extension, is a “gossip” or “eavesdropper.” One early instance appears in the 1996 song “Rapper’s Ball” by E-40: “I keep a briefcase full of game / while y’all be ear-hustlin’.”

Nobody likes an ear hustler, as other hip-hop lyrics make clear, such as Kendrick Lamar’s 2009 “Determined”: “Ear hustle on a n**** that’s constantly braggin’ / Catch him at the light, snatch him out his Jeep wagon.”

Ear hustler implies a person is eavesdropping or spreading rumors to take advantage of private information in some way, usually at the expense of the person being listened in on or gossiped about.

Today, I am a person that enjoys putting my hands in the dirt and growing my food. I am a person who still takes long walks. I’m a voyeur. I like to watch people live, laugh, and have conversations. I’m an "ear-hustler."
Jill Scott quoted by Gia Peppers, Essence, July 29, 2015
It's very hard to concentrate on my lunchtime reading when you want to ear hustle on the little old lady nearby talking about her #polymorous life to her young companion
@swampmonster, March 8, 2019
My older sister used to ear hustle while I’m otp & go tell my mom I was talking to boys
@_Deashay, July 30, 2020
SEE MORE EXAMPLES

Ear hustler has remained popular in hip-hop lyrics since “Rapper’s Ball.” Layzie Bone dropped it, for instance, in his 2005 song Smokin’ on Information, featuring Jon Little III and the king of smoking himself, Snoop Dogg. The Atlanta-based rapper, Mango Foo, came out with the album Ear Hustling in 2016.

Ear hustler has spread from lyrics to prose. In 2010, it titled the book Ear Hustlin, which details the main character’s penchant for making a living as an ear hustler and the trouble it eventually gets him into.

Playing off ear hustle as prison slang and podcasts as an audio medium, the podcast titled Ear Hustle launched in 2016 with the mission to tell the stories of those behind bars from the voices of inmates themselves. It seeks to humanize the prisoners and expose problems within the criminal justice system.

At San Quentin State Prison, the wildly popular podcast, "Ear Hustle," is produced by the inmates themselves and tells the stories of life inside prison, shared by those living it

As noted, ear hustle is the verb form, ear hustler the noun. It often carries a negative connotation, but sometimes it can be more positive, i.e., someone who has the ears out and is ready to act on what they encounter for their success.

This is not meant to be a formal definition of ear hustler like most terms we define on Dictionary.com, but is rather an informal word summary that hopefully touches upon the key aspects of the meaning and usage of ear hustler that will help our users expand their word mastery.