What does ever after mean?

Where does ever after come from? 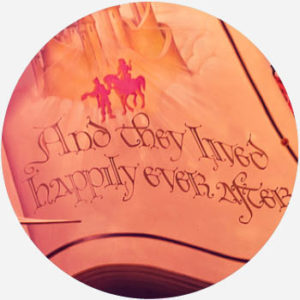 We can find the phrase ever afterward around 1300 and ever after in the early 1400s. They mean “for all time (ever) going forward from some point (after),” which English speakers would generally say or write as ever since today.

Except in fairy tales, where ever after survives in the formula of happily ever after.

This particular phrase is recorded by the early 1700s, but by the 1860s it had become commonly associated with fairy tale and children’s stories. It especially appears in they lived happily ever after—making sure all the princes married their princesses in their castles and enjoyed the rest of their days. By the 1880s, we can already find authors calling happily after ever out as BS.

What, exactly, cemented this connection isn’t clear, as the historic sources of fairy tales don’t feature happily ever after. Nevertheless, the connection was sealed by the 20th century. Not only have countless stories closed with (happily) ever after, but the phrase itself has come to represent fairy tales and happy endings—and marriages, where happily ever after is the storybook ending we’re told to dream of.

Finishing actual stories with living happily ever after became cliché by the 1990–2000s, but popular media, writing, and speech widely use ever after in titles in everything from collections of fairy tales to self-help books on retirement.

Disney even has a wedding blog called Ever After. And, remember that Drew Barrymore movie Ever After, a 1998 fantasy romance?

Ever after has become so common that we can use it like a noun (e.g., we’re all searching for our happily ever after or he finally found his ever after). How … nauseating.

You put the “happily” in my “ever after” 💙🙈 pic.twitter.com/EAlPaEkCnM

Examples of ever after

For Daniel Cormier, it's enmity at UFC 210 and love ever after
Martin Rogers, USA Today (headline), April, 2017
She asked them, ‘Do you want to know the secret to ever after?’ And the girls looked at them with wide eyes and said, 'Yes,’ and she said, ‘Money and power.
J. Randy Taraborrelli quoted by  Inside Edition, January, 2018
But as they attempt to live kinkily ever after — buying houses, debating surnames and contemplating children — a jealous stalker from the past, Jack Hyde... simply won’t leave them alone.
Jason Fraley, WTOP, February, 2018
SEE MORE EXAMPLES

Who uses ever after?

If all this lovey-dovey ever after business may make you want to gag, many people have riffed on happily ever after for more real-like sentiments.

And many instances of  ever after are dripping with skepticism (e.g., Go on thinking we all live in some magical fairyland where we all live happily ever after.

What happens to American hostages in North Korea after they’re released? They don’t always live happily ever after. https://t.co/Hb51ndyN2d @vicenews pic.twitter.com/wFkN9XwaBO

But, admit it, we’re all suckers for a good romance …

I went outside today on a taco mission and I swear the white blanket of snow spoke to me, it said….”Get tf back in your house my guy” and so he did and ordered pizza instead and lived happily ever after 🌄🐎

This is not meant to be a formal definition of ever after like most terms we define on Dictionary.com, but is rather an informal word summary that hopefully touches upon the key aspects of the meaning and usage of ever after that will help our users expand their word mastery.