Feedback
Eskimo brothers
ever after

Esskeetit is a 2018 song and catchphrase of rapper Lil Pump. It is his way of saying a pumped-up “Let’s get it.”

Where does esskeetit come from? 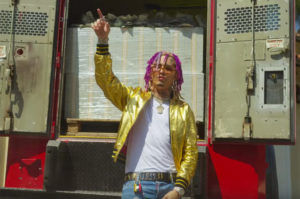 The song ESSKEETIT by Lil Pump was released on April 13, 2018. The song is about esskeetit-ing drugs, designer clothing, luxury vehicles, and other aspects of a wealthy lifestyle.

Lil Pump, though, had previously tweeted ESSKEETIT in March 2017.

Rapper Smokepurpp, an associate of Lil Pump, told XXL that the term esskeetit was inspired by “Let’s get it” as an ad-lib in Chicago drill music. Both terms refer to becoming wealthy or successful, as depicted in the music video for Lil Pump’s ESSKEETIT.

Only wear designer, esskeetit / Hoppin' out the Wraith, esskeetit / Smashin' on your bitch, esskeetit / Runnin' up a check with no limit
Lil Pump, "ESSKEETIT" (song), 2018
had so much fun at SNL. Lorne agreed that I would host before the year is out. Need to set a date. Gonna be sooooooooo lit. In the words of Lil Pump ...Esskeetit !
@kanyewest, September 2018 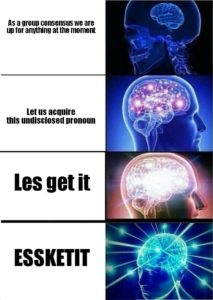 Lil Pump frequently uses esskeetit (almost always in all caps) in interviews…and in between swears on social media.

IF U DONT LIKE ME THEN FUCK U BITCH ESSKEETIT

I HADE A 3 SUM MY LAST NIGHT IN CANADA ESSKEETIT

Most often, esskeetit is used in reference to Lil Pump, so associated it is with his catchphrase. Fans of Lil Pump may shout it in excitement.

I’m not saying that I like @lilpump, but what I am saying is Esskeetit

Fun fact: if you shout “ESSKEETIT” three times at the top of your lungs in the mirror at your house in the middle of the night, Lil Pump will appear

Occasionally, fans of Lil Pump will use esskeetit, true to the rapper, “Let’s get it!” or “Let’s do this!”

Many of us say that we want it bad, but the reality is many of us just kind of want it. So #esskeetit

Oktoberfest day is upon us 🇩🇪🤘🏽#esskeetit

Okay I’m still drunk. Met this kinda popular military contractor and this nigga told me to send him my resume… if this nigga serious I can make $110k next year…………. ESSKEETIT!!

This is not meant to be a formal definition of esskeetit like most terms we define on Dictionary.com, but is rather an informal word summary that hopefully touches upon the key aspects of the meaning and usage of esskeetit that will help our users expand their word mastery.