What does cash me outside mean?

Originating as the catchphrase of TV and social-media star Danielle Bregoli, cash me outside is a meme challenging another person, often humorously, to a fight.

It's a Jersey thing, hot mess, if you can't handle me at my worst, badd, hey hey hey

Where does cash me outside come from? 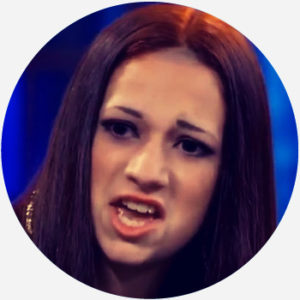 In September, 2016, an episode of The Dr. Phil Show featured a thirteen-year-old girl whose rebellious, belligerent attitude had left her mother seeking help from Dr. Phil.

The girl, Danielle Bregoli, seemed to be in a highly combative and violent relationship with her mother, claiming to have run away from home four times in one day on one occasion. Upset at the audience for laughing at her too many times, Bregoli challenged them to fight her with the phrase “Catch me outside, how about that!”

The Dr. Phil Show posted the segment, “13-Year-Old Says Mom Will Do Anything To Stop Her From Having Fun,” online on September 15th, 2016. The video’s humorous elements found favor on some corners of the internet.

In October 2016, an image macro of Bregoli captioned with her challenge appeared on humor website Memecrunch. Because of Bregoli’s accent and pronunciation, which she claims is from “the streets,” her signature phrase was transformed into Cash me ousside howbow dah?

The meme got another boost when Facebook humor page DigitalMemes started posting photos of Bregoli. The first, posted on January 2017, gained over 14,000 likes and has been shared over 75,000 times. The meme used the original Memecrunch image macro as a reaction to the premise: When somebody says, ‘How about you save some Pizza for the rest of the group. It quickly gained popularity, peaking in late January and early February, 2017 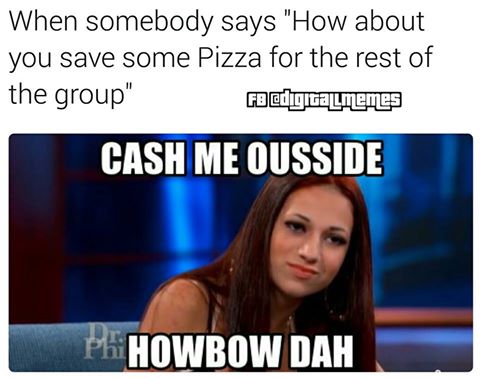 Bregoli capitalized on her fame, making paid appearances with her fans and engaging in celebrity feuds as the Cash Me Ousside Girl.

In March 2017, DJ Suede the Remix God released a single, “Cash Me Outside,” sampling Bregoli’s cash me ousside howbow dah. It made the Billboard Hot 100 charts and sparked a series of YouTube dance videos and other remixes.

Danielle Bregoli, taking further advantage of her celebrity, released the rap single “These Heaux” which also made the Billboard Hot 100 in August 2017. This made her, at 14, the youngest female rap artist to debut on Billboard. She was thereafter signed to Atlantic Records under the stage name Bhad Bhabie.

The viral phrase also inspired two mobile app games “Cash Me Outside” and “How Bow Dat” as well as a Walmart t-shirt, all resulting in lawsuits from Bregoli.

Examples of cash me outside

Whoever got hotline bling stuck in my head… Cash me ousside
kittysmashh, Tumblr, May, 2017
I honestly try so hard to remain professional at my job but some of these people ? CASH ME OUSSIDE HOW BOW DAH.
@Kat__Bunny, May, 2017
Is there going to be a 'Cash Me Outside' Junior? Fans are convinced that Danielle Bregoli is pregnant after a photo surfaced of her alleged baby bump.
Anna Quintana, Life & Style, April, 2017
SEE MORE EXAMPLES

Who uses cash me outside?

The cash me outside or cash me ousside meme is used online as an equivalent of “fight me” in difficult or annoying situations, usually imagined as a humorous or clever responses to hypothetical scenarios.

Sometimes people use Bregoli’s original Dr. Phil appearance, the image macro, or other remixes and representations centered on her catchphrase. The meme became so viral that many people simply quoted the text of cash me outside/cash me ousside howbow dah on social media. 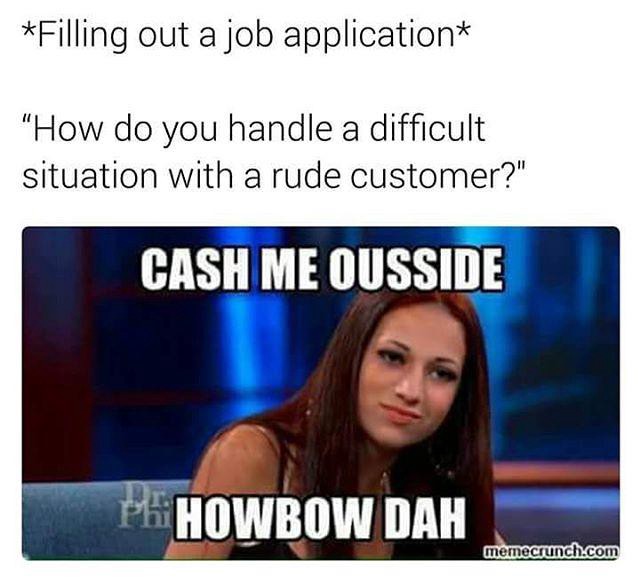 Other people riffed on Bregoli’s howbow dah to propose an activity or boast a success, echoing ways we use How about that? to make a suggestion or call attention to something.

As the meme peaked in 2017, people took to punning on the meme for more literal instances of “catching someone outside”: 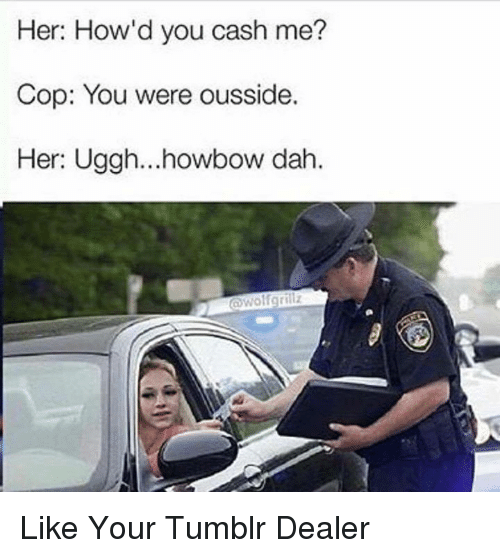 This is not meant to be a formal definition of cash me outside like most terms we define on Dictionary.com, but is rather an informal word summary that hopefully touches upon the key aspects of the meaning and usage of cash me outside that will help our users expand their word mastery.