cash me outside
clock spider

What does Chuck Norris facts mean?

Where does Chuck Norris facts come from? 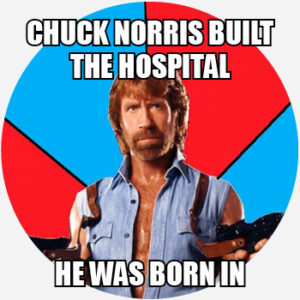 Chuck Norris facts were preceded by Vin Diesel facts. In 2005, after actor Vin Diesel starred in the family comedy The Pacifier, a thread titled “Facts About Vin Diesel” appeared on the Something Awful forums. Ian Spector, then a college student, started a website that would display a different Vin Diesel fact each time the page was refreshed. As would later be true of Chuck Norris facts, the facts submitted about Vin Diesel were frequently absurd or hyperbolic. At the height of its popularity, the site received around 200,000 views per day.

Following the success of the Vin Diesel fact page, Spector set up a poll to decide what celebrity would be the subject of the next fact generator page. Although Norris was not one of the options listed in the poll, he received more write-in votes than any of the listed candidates (including George W. Bush, Dick Cheney, and Lindsay Lohan, among others). His popularity may have been helped along by late-night comedian Conan O’Brien, who popularly mocked Chuck Norris and his show, Walker, Texas Ranger, in 2005–06.

"Chuck Norris once visited the Virgin Islands. They are now known as 'The Islands.'"

On the conservative news and opinion website World Net Daily, Norris commented on the trend: “Some are funny. Some are pretty far out. And, thankfully, most are just promoting harmless fun.” He went on to explain that he felt the praise of him was misplaced and to advocate that people look to Christianity for inspiration instead.

Norris willingly participated in the trend, though. During the 2008 presidential primaries, Norris appeared in a campaign ad with Republican presidential candidate Mike Huckabee. In the ad, Huckabee shared Chuck Norris facts and Norris replied with descriptions of Huckabee’s political platform. Norris’s own website even displays a feed of Chuck Norris facts along its bottom. 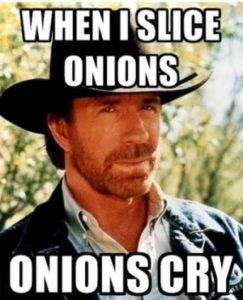 Chuck Norris facts are often memed over various pictures of the actor, although they’re equally effective without images:

Chuck Norris and Superman once fought each other on a bet. The loser had to start wearing his underwear on the outside of his pants.

Chuck Norris facts have also been widely parodied. In India in 2011, fans spread “facts” about the Tamil actor Rajinikanth, and in 2013, Buffalo Bills fans shared Chuck Norris-styled facts about linebacker Kiko Alonso on Twitter with the hashtag #LegendOfKikoAlonso.

He once killed 2 stones. With one bird #LegendOfKikoAlonso

This is not meant to be a formal definition of Chuck Norris facts like most terms we define on Dictionary.com, but is rather an informal word summary that hopefully touches upon the key aspects of the meaning and usage of Chuck Norris facts that will help our users expand their word mastery.