Feedback
it is what it is
it's been real

What does It’s a Jersey thing mean?

There is a strange, dark land along the Atlantic Ocean where the people have terrible fake tans and actually enjoy Bon Jovi. Why do they act this why? You wouldn’t understand: It’s a Jersey thing.

It’s a Jersey thing is a joke stereotyping, but also embraced by, the so-called Italian-American guido culture of New Jersey, among other residents of the duly proud state.

Where does It’s a Jersey thing come from? 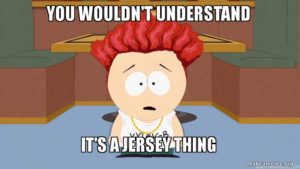 It’s a Jersey thing was popularized as a punchline, though, thanks to a 2010 South Park episode appropriately called “It’s a Jersey Thing.” The episode ruthlessly mocks the guido culture of New Jersey that received mainstream attention in 2010 thanks to the hit MTV reality show, Jersey Shore. Think muscle-y, tough-guy bros with gelled hair, skin-tight clothes, and gold jewelry. Think Snooki.

In the episode, the character Kyle Broflovski learns he is from New Jersey and begins acting like characters from Jersey Shore once he discovers it. Throughout the episode, he, and others, justify their newly uncharacteristic and bizarre behavior, including acting like guidos and talking to imaginary reality TV confessional cameras, as something non-New Jersey residents wouldn’t understand because It’s a Jersey thing. 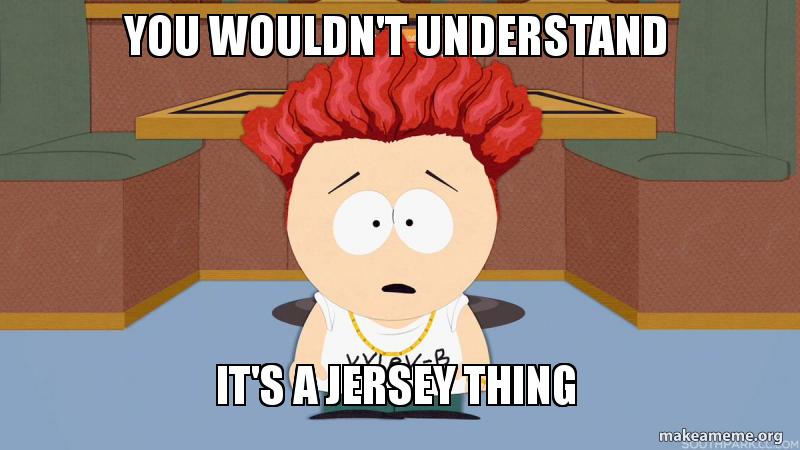 Though they may be the butt of many jokes, Jerseyites have thick skins and a good sense of humor. The episode was a hit with residents of the Garden State.

Just watched the South Park making fun of the Jersey Shore …. Wow Hilarious but I must say … "Its a Jersey Thing ! "

In fact, despite being depicted as a hideous goblin creature resembling the Jersey Devil, even self-styled guido Nicole “Snooki” Polizzi herself tweeted a positive reaction to the episode. 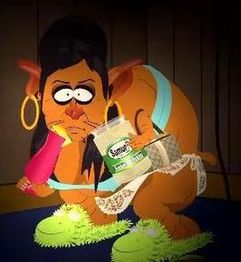 It’s a Jersey thing was embraced by some New Jersey residents as a phrase expressing pride in their state. The phrase has been printed on t-shirts. A restaurant has even named itself after the phrase.

Examples of It’s a Jersey thing 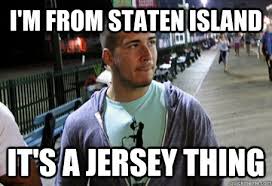 qkme.me
It's a Jersey thing although they've wussified most of the remaining Traffic Circles in New Jersey as seen in a previous thread by adding such nonesensical [sic] devices as stop and yield signs
Frank Curcio, misc.transport.road Usenet group, July, 2001
I’m curious I have wawas where I am but I wanna know if in PA your wawas have pork roll egg and cheese breakfast sandwiches in the morning? From what I know it’s a Jersey thing but since they have custom boxes for it I was wondering if they do sell them there
@zen_neary, August, 2018
SEE MORE EXAMPLES

Who uses It’s a Jersey thing?

It’s a Jersey thing still shows up occasionally in New Jersey memes, often with pictures of the cast of Jersey Shore. 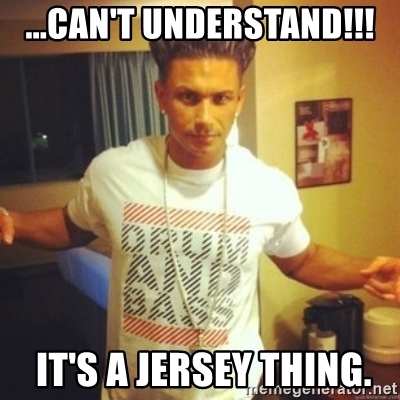 Despite the episode now being approximately “800 Internet years old,” It’s a Jersey thing is still a proud declaration of sons and daughters of that lovably weird state. You do you, Jersey.