Feedback
It's a Jersey thing
it's lit

What does it's been real mean?

It’s been real is a phrase used as a casual farewell. It’s often used to express that a good time was enjoyed by all, though sometimes is used ironically to express such feelings as anger or annoyance.

Had a great time on that road trip with your old college buddies? It’s been real, pals.

Where does it’s been real come from? 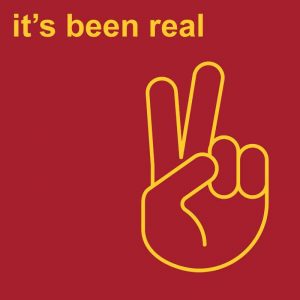 It’s been real is attested as early as 1954 in American novelist Wright Morris’s The Huge Season. The real, in the phrase, is slang for “excellent” or “authentic,” dating back to at least the late 1940s. The real also sums up, upon leaving and often accompanied by a handshake or other gesture, some time spent with a person was memorable in some way—good or bad.

It’s been real joins related phrases that include it’s been real good, it was good time while it lasted, it’s been nice knowing you, and it’s been a real slice. The latter made its way to Hollywood in the 1997 Disney animated movie Hercules. In one scene, Hercules meets his love interest in the film, Meg, and out of nervousness, embarrasses himself. As Meg waves goodbye, she says, it’s been a real slice. That expression dates back to at least 1979 and the slice may refer to slice of life.

In 2011, rapper Eminem “dropped” a song called “It’s Been Real.” The track was never officially released, but was part of a fan-made compilation called Straight From the Vault EP, which featured a series of leaked Eminem songs.

Is it’s been real the best slang prhase in English? Vote in the Dictionary.com March Madness Slang Bracket contest!

Examples of it’s been real

Who uses it’s been real?

It’s been real is often used as a parting message to an individual or collection of people to express having had a good time. There’s often a tinge of sentimentality to it. It can also be used at the end of a visit, event, media program or series, season, or other such stint or run of something—like, oh, human civilization.

Jersey city, not your most beautiful look but I love you anyways, it’s been real pic.twitter.com/so46xOuRxo

Sometimes, especially in actual speech, the phrase is ironic, as if to express annoyance or disappointment. For instance, if you quit a social media platform, fed up with its news feed and data policies, you might say, Well, it’s been real. This implies that the experience made an impact, though not ultimately a entirely positive one.

The irony!! Gotta give McDermott credit here, when he's wrong, he admits it and corrects the fault. That being said, valient effort by nate but looks like his time is done… It's been real lol #Buffalofanatics #Bills #BillsMafia pic.twitter.com/bgZCNKbqUR

This is not meant to be a formal definition of it’s been real like most terms we define on Dictionary.com, but is rather an informal word summary that hopefully touches upon the key aspects of the meaning and usage of it’s been real that will help our users expand their word mastery.