Feedback
it's been real
jacking it in San Di...

What does it's lit mean?

It’s lit means that something is really good, intense, fun, or exciting, similar to other slang terms such as poppin’ or off the chain.

Where does it’s lit come from? 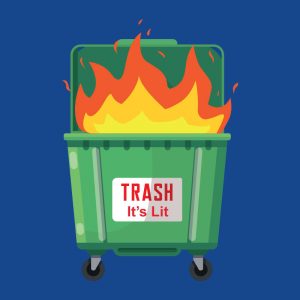 Based on the past tense of the verb light, lit as a slang term has been part of the English language since the 1910s. It first meant “intoxicated,” perhaps because one’s appearance or behavior was perceived as lit (or “lighted up”) when they were under the influence. By 1999, the term was evolving to mean “excellent” (cf., hot or cool). Popular sites like Urban Dictionary introduced the term by early 2009.

It may not be surprising that a term originally related to drunk-ness would transition toward capturing the overall excitement of parties or events, which are now often considered lit. By 2015, the slang had grown increasingly mainstream—and increasingly broad as a term for something “exciting.”

Call up your friends and say ‘It's lit! Let's bring a goddamn bookstore to the Bronx!’ Tell them about the awesome perks they can receive for supporting literacy.
Noëlle Santos, Indiegogo, March 2017
Drake really boutta drop a winter album? Oh bruh it's lit. Boutta be in my feelings sippin on my hot chocolate... roasting marshmallows
@DrakeDaily, January 2018
I’m really out here enjoying life to the fullest. I really know it’s lit when my night doesn’t make it to social media 😭
@cam_whit, April 2022
SEE MORE EXAMPLES

The phrase is associated with youth slang. In fact, Instagram, a platform widely used by people under 35, contains over 780,000 posts under the hashtag “#itslit.”

It’s lit fam is also a common extension of the phrase, where fam is an abbreviation of family. The phrase is used to address one’s close friends, social-media followers, or other hypothetical audiences.

It’s lit is very common in pop culture, so much so that a marketing report created by Google is titled “It’s Lit: A Guide to What Teens Think Is Cool.”

Rapper Travis Scott has also championed the slang lit, using it in his freestyle raps as one of his signature lines.

It’s lit is frequently paired with the fire emoji 🔥 to emphasize something’s metaphorical hotness or being “on fire.”

This is not meant to be a formal definition of it’s lit like most terms we define on Dictionary.com, but is rather an informal word summary that hopefully touches upon the key aspects of the meaning and usage of it’s lit that will help our users expand their word mastery.