What does poppin' mean?

When used as an adjective, poppin’ is a synonym for awesome, popular, or fresh, especially prominent in US black slang.

Where does poppin’ come from? 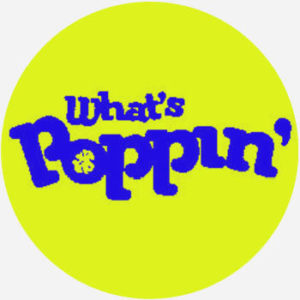 Poppin’ is a clipped form of popping, dropping the final G, a common feature of African-American Vernacular English (AAVE). Poppin’ had taken on a meaning in black slang by the 1940s, when it referred to “lavish and reckless spending,” the action of the verb apparently likened to the ready energy of such spending.

That usage has survived somewhat into modern day hip-hop music, as poppin’ pills or bottles is common slang for doing recreational drugs or drinking recklessly as a result of having too much money to know what to do with.

The breakout of poppin’s popularity as a modern slang term came in 2007. In quick succession, three major hip-hop artists charted songs with poppin’ in either the title or the hook: Chris Brown’s “Poppin’,” which reached #15 on the Billboard charts in March, 2007; Lil Mama’s “Lip Gloss,” which peaked at #16 in June, 2007; and T.I.’s “Big Things Poppin’ (Do It),” which hit #9 in August, 2007. In these songs, poppin’ conveyed “happening, bustling with excited activity,” and extended to a kind of “effortless cool.”

Google searches for poppin’ hit their all-time high in July, 2007 from users searching for these songs as well as the meaning of the term after hearing the songs. Since then, poppin’ has become a popular phrase to describe anything new, fresh, or happening.

While the movie is generating a lot of interest at many theaters, in the Black community, tickets are the hottest. From theatres to patrons, things are poppin’.
Erick Johnson, The Chicago Crusader, February, 2018
Roses are red Violets are blue That highlighter is poppin' TROPHY WIFE looks amazing on you 🏆✨
@fentybeauty, February, 2018
Prince famously drove to @flytetymejam’s house and threw the record at his door zero o’clock in the morning (hey, if you ain’t got no haters you ain’t poppin) not to take away from her peers in the RRHOF that made marks in the 80s.
@questlove, February, 2018
SEE MORE EXAMPLES

In the late 1990s in New York, members of the newly formed United Blood Nation (UBN) began to say “What’s poppin’?” with expectation of a response of “5 poppin’, 6 droppin’”— that is, five UBN members (represented by a five-pointed star) shooting and six rival gang members (Crips, represented by a six-pointed star) dropping dead. This use of poppin’ puns on the sense of “What’s happening/What’s up?” as well as pop a cap, a slang phrase for “shooting someone.” In present day, people can use this phrase casually without knowing the origin of it.

Poppin’ is most commonly associated with US Black English. Black women in particular use the phrase to compliment other black women’s fashion, where the term may also draw on the use of pop in fashion and design for a color, accessory, style, or look that pops, or “jumps out.”

Many people outside of the US black community have adopted the term thanks to its popularity in hip-hop music and culture, though some appropriations of the term have been used as a joking or stereotyping reference to black speech.

This is not meant to be a formal definition of poppin’ like most terms we define on Dictionary.com, but is rather an informal word summary that hopefully touches upon the key aspects of the meaning and usage of poppin’ that will help our users expand their word mastery.