What does poppin' tags mean?

If you look fly, maybe you’ve been shopping at the mall and poppin’ tags by buying lots of nice clothes and accessories … or, depending on your interpretation, stealing them? Poppin’ tags can refer to being successful and looking stylish more generally.

Where does poppin’ tags come from? 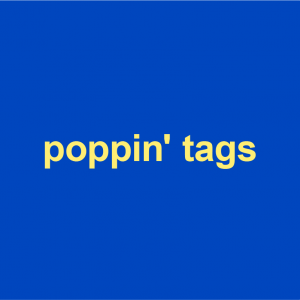 The expression poppin’ tags comes from Black slang and is found by the 2000s. It may originate in graffiti culture, where a tag refers to an artist’s signature spray-painted sign or symbol. Poppin’ tags, here, would mean “marking graffiti tags.”

Poppin’ tags was popularized in the 2002 track “Poppin’ Tags,” originally by Twista and Ludacris and featuring Kanye West. Later that year, Jay-Z re-released it on his album The Blueprint 2: The Gift & the Curse. In the song, poppin’ tags means “buying lots of clothing and accessories,” taking the tags off after purchase for wearing. Sleepy Brown does the chorus: “We gon’ stay showin’ off that jewelry that we bought / And we gon’ stay leavin’ out the stores with heavy bags / ‘Cause we be poppin’ tags, pimpin’, we be poppin’ tags.”

The expression caught on in the hip-hop community and its fans. A number of other hip-hop tracks later featured it, as when Bow Wow boasted on his 2006 song “Bet That” that “store closed, still poppin’ tags on a Sunday.” Gotta look fresh, folks.

Some people took poppin’ tags to mean “shoplifting,” a reference to removing the electronic tags put on clothing to set off alarms. The meaning itself is a bit ambiguous in Jay-Z’s “Poppin’ Tags” when he raps: “Act a damn donkey / like the Pilgrims when they popped a tag on the Indian’s home.” This appears to mean the English colonists stole native land.

Artist Macklemore sparked new interest in poppin’ tags when he featured the expression in his 2012 hit song “Thrift Shop,” which is about getting clothes at Goodwill. In the catchy chorus, rapper Wanz sings: “I’m gonna pop some tags / Only got 20 dollars in my pocket.”

In hip-hop music and the broader popular culture it has influenced, poppin’ tags is a way to boast about how much clothing/accessories you’ve bought or how good you look in them.

Poppin tags…. These are the ones I was refunded on last week 😁 pic.twitter.com/nZo3xEpVsT

If you can pop some tags, you’ve probably got some money to burn, and so poppin’ tags can refer to wealth or success more generally.

This is not meant to be a formal definition of poppin’ tags like most terms we define on Dictionary.com, but is rather an informal word summary that hopefully touches upon the key aspects of the meaning and usage of poppin’ tags that will help our users expand their word mastery.