What does realest mean?

Realest is the superlative form of real, used in slang for someone or something “extremely authentic” or “exceptional.”

Where does realest come from? 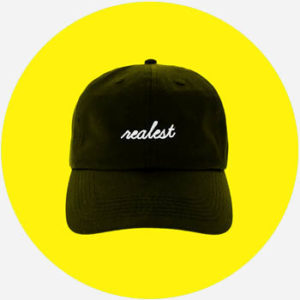 The word real dates back to the 14th century, meaning “true” or “existing.” Reality and realize are related terms. By native rules of English grammar, the superlative form of real is realest, or the “most real” thing or idea.

Real‘s sense of true became associated with “honest” qualities of a person, illustrated in this one instance from a 1923 House and Garden: “It is not a bad idea to locate one’s dream house in imagination first. It is inexpensive in upkeep and gives one time to mull over one’s innermost—and therefore realest—longings.”

Perhaps growing out of 19th-century expressions like the real McCoy (“the genuine article”), real proliferated in slang in the late 19th century: for real, get real, and keep it real, all variously signifying “authenticity” and being “rooted.” By the 1990s, realest extended as a slang descriptor, found in hip-hop slang by 1994, for “exceptional,” used alongside other terms like chillest and illest, all conveying “best.” Realest specifically maintains a sense of “relatable and trustworthy,” especially said in the 2000s of celebrities, politicians, or other public figures when they show their personal, or real, sides.

I feel i'm the realest friend a person can have. If you don't know anything know ima ride til the wheels fall off baby 😅
@trrippyyy, April, 2018
It's funny, because I love Lil' Kim! I'm one of her biggest fans. There's no denying she's the realest bitch in the game...
King Magazine, 2006
And on Invasion of Privacy, she digs even deeper and gets more vulnerable about her relationships (“Be Careful”) and relationships in the digital era in general. “Thru Your Phone,” is the realest song about going through your partner’s phone, seeing something you don’t want to see, and all the creative murder fantasies that come along with the hurt.
Allison P. Davis, The Cut, April, 2018
SEE MORE EXAMPLES

Realest is particularly present in black speech and on social media. In this slang meaning, someone who is the realest is the “best” in that they are original and down-to-earth—always, sometimes vulnerably, true to who they are and treating others the same way. Referring to someone as the realest is a sign of respect for their consistent dedication, talent, loyalty, or other positive qualities. In this way, realest is generalizing as a slang term for “excellent.”

Calling oneself the realest can be see as performative or boastful while telling someone an opinion that is the realest may deliver a truth that is hard to swallow.

Realest is prevalent in hip-hop and pop music. Rapper Jevon Jones, for instance, has gone by the stage name The Realest since at least the late 1990s. Showing the spread of the word from hip-hop to the mainstream, Australian singer Iggy Azalea opened her breakout 2014 hit “Fancy” with the line: “First things first, I’m the realest.” This lyric inspired a slew of cheeky merchandise playing off the word realest, as in shirts with an image of Santa Claus affirming that he is the realest. Google searches for realest demonstrated a modest spike when the Iggy Azalea song gained popularity in the United States, but not as high as in 2005 following rapper Yung Ro’s song, “Who is the Realest.”

This is not meant to be a formal definition of realest like most terms we define on Dictionary.com, but is rather an informal word summary that hopefully touches upon the key aspects of the meaning and usage of realest that will help our users expand their word mastery.