What does rest in peace mean?

Rest in peace is a common epitaph found on Western gravestones. In colloquial speech and writing, it’s used to note the literal or metaphorical death of someone or something.

Where does rest in peace come from? 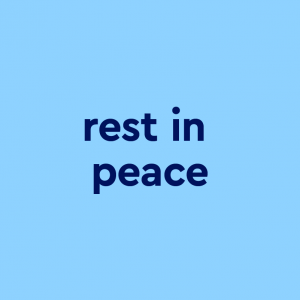 Today, it is more common to find rest in peace or R.I.P. on gravestones and in funeral services than its Latin parent. The acronym R.I.P. appeared first in 1613 as an abbreviation for requiescat in pace, then in 1681 for rest in peace.

The phrase rest in peace and the acronym R.I.P. have migrated into secular use over the centuries, given Christianity’s extensive influence on secular Western culture. In funeral settings, rest in peace has a solemn tone appropriate to the occasion. Outside of burial ceremonies and gravestones, rest in peace has come to be used in obituaries and online to signify respect and well wishes for a beloved person who has died. The hashtag #RIP is commonly appended to social-media posts in which fans mourn the passing of public or private figures they admired while also celebrating their lives and impact.

I am so sad Baltimore, Maryland, Congressman Elijah Cummings died this morning. He was only 68. RIP @RepCummings, civil rights and social justice warrior

Rest in peace has also developed more lighthearted, humorous extensions. On social media in the 21st century, it is more often used in the form of RIP for the metaphorical deaths of such things as cancelled television shows or apps and celebrity breakups.

Examples of rest in peace

RIP me as I write a 5 page paper synthesizing 4 essays that I haven’t read due tomorrow
@DylanEjma, March 15, 2018
guys they’re really going to fcking release the trailer for infinity war tomorrow and i am not, in any way, physically, mentally, emotionally & spiritually ready my soul is not ready i will never be ready guys im going to die and i blame mcu & kevin for it jcisososjcjddk rip me
@jamierilloraza, March 15, 2018
But at least one investor won’t let the VIX ETN rest in peace. Rajan Chahal filed a class action lawsuit Wednesday in federal court in New York against Credit Suisse Group alleging the firm failed to disclose that it was manipulating the Inverse VIX Short ETNs to the detriment of investors.
Crystal Kim, Barron's, March 15, 2018
SEE MORE EXAMPLES

Who uses rest in peace?

R.I.P. can also often be found on creepy themed props and decorations around Halloween. Because it is a short, recognizable reference to death and graveyards, it can easily lend a spooky tone to party settings. This usage emphasizes the term’s complete transition from religious roots into secular use.

Still remember this one time, when I was working as a barista at Borders (RIP), a girl tried to return the cappuccino I made her bc it was too foamy.

Rest in peace—or, more commonly, given character limits and internet users’ penchant for abbreviations, RIP—has taken on several meanings online. Some users will include the phrase “RIP me” in posts about events, people, or things they think are so great they’re overwhelming. For instance, a photo of a celebrity might be captioned by a fan, “They look so beautiful in that dress, RIP me,” as if their beauty killed the poster.

This use is most often associated with young “fangirls” posting about their favorite singers and actors. Online users also use RIP as a hyperbole to indicate a combination of frustration, resignation, or embarrassment. For example, someone locking themselves out of their car might say “RIP me.” In these less formal contexts, the term is sometimes stylized simply as rip and pronounced as one word instead of individual letters. RIP can also be used as a verb, as in RIPing.

May have just posted a meme with inappropriate sexual connotations in my family chat, RIP me.

This is not meant to be a formal definition of rest in peace like most terms we define on Dictionary.com, but is rather an informal word summary that hopefully touches upon the key aspects of the meaning and usage of rest in peace that will help our users expand their word mastery.