RealmEye is an online tool for player information and assessment in the game Realm of the Mad God.

Where does RealmEye come from? 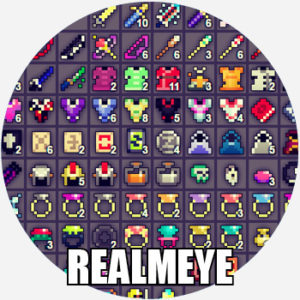 The browser-based game Realm of the Mad God was first released in June 2011 as a multiplayer “bullet hell shooter,” where players shoot monsters and dodge waves of projectiles to survive. Likely frustrated by the lack of utilities for the game, RealmEye was created by two programmers as a side project and was launched in November 2012 as a website letting fellow Realm players look at (or keep an eye on) rankings, profiles, and stats.

Following the increase in the number of players of Realm of the Mad God, RealmEye also became more popular in 2013. Players likely began to become aware of RealmEye at this time, realizing its potential as a way to definitively rank accounts, characters, and more based on well-presented numbers and metrics. Players had much to gain from being able to report their status in a standardized way, especially since the game was growing, with its total player base going from over 1.4 million accounts in mid-2013 to over 5.1 million in early 2018. With so many players, people needed a way to communicate effectively.

RealmEye continued to be so useful that it launched its own forum in 2016, which serves as a hub for players of Realm of the Mad God. The site features a community as well as up-to-date information on the game. This made RealmEye a one-stop shop, allowing players to meet many of their gaming interests and needs. Because of its forum, RealmEye also offers a viable alternative for players who don’t want to use another community, such as Reddit. Since then, the forums have continued to grow and host a bustling community.

Sure, I can use the RealmEye stat check method and go for a +/- value, but I’d prefer to do the checking on the fly with some solid numbers.
Acez High, GuideScroll, May, 2014
Why doesnt realmeye show all of my characters i have 4chars but only 2 are being displayed when i search myself at realmeye
Sisqo, d2jsp (forum), September, 2013
Has anyone ever thought of messing with realmeye? Like, so you can do some hack hacky magic and see where other players are even if they set it to private?
lelxd123412322, MultiPlayer Game Hacking, January, 2018
SEE MORE EXAMPLES

RealmEye is used by players of Realm of the Mad God as a tool set to help them assess their performance and other player’s performance in the game. Crucially, they can use RealmEye to view statistics that will help inform them on their choices so that they can more efficiently build “pets” (allies) or characters. They can also view a list of the top players, guilds, characters, and pets in the game. This allows players to see who the elite are. As the site is public, players can be looked up and derided or praised for their progression in the game.

Though the website has more data at hand, some RealmEye utilities can be accessed through interacting with an in-game bot named MrEyeball. Players can issue the bot commands, such as /tell mreyeball server, which will report back the last server the website saw the player on.

Players can also access the RealmEye site to read the wiki, which contains useful information about the game, such as what a dungeon is and what the existing dungeons are. It’s also helpful to new players as it hosts a guide to starting the game.

This is not meant to be a formal definition of RealmEye like most terms we define on Dictionary.com, but is rather an informal word summary that hopefully touches upon the key aspects of the meaning and usage of RealmEye that will help our users expand their word mastery.