What is an Irish goodbye?

An Irish goodbye is when you abruptly leave a party without telling anyone.

Where does Irish goodbye come from? 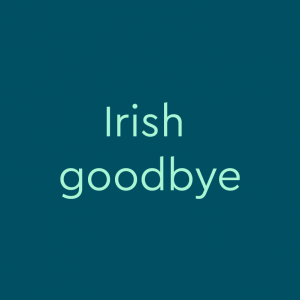 It’s not entirely clear when the Irish goodbye emerged or what’s particularly Irish about it. Rice University’s database of neologisms says the term comes from Boston, Massachusetts, which has a large Irish-American population. Rice specifically describes the Irish goodbye as a drunk person leaving without talking to anyone in order to avoid revealing how drunk they are.

Not everyone specifies that someone has to be drunk to make an Irish goodbye, though. Other possible origins have been suggested, but without much evidence. A writer at Irish Central suggested it has to do with Irish hospitality and gab: the ritual of leaving an Irish social gathering is so long-winded, that it’s easier to just sneak out. Irish rugby player Donncha O’Callaghan, on the other hand, writes in his 2012 autobiography that he thinks it’s because the Irish are actually reserved—at least compared to some of the other national teams he encountered.

The phrase Irish goodbye gained popularity in the 2000s. In the 2004 novel Boarding Call, for instance, one character attempts an Irish exit before another calls him out on it. In 2007, singer-songwriter Maria Taylor wrote a song titled “Irish Goodbye,” which opens with the lines “Nonstop talk / It’s eleven o’clock / There’s a line coming out the door / I’m not feeling it / But I swore I’d go,” the seed of an Irish goodbye if we’ve ever heard one.

Irish exit all work functions
@hasnemdivad, August 1, 2018
America had educated me. Given me employment opportunities I would never have gotten in Ireland. Brought me love and friendship. Exposed me to some incredible highs and horrific lows. Got me into therapy when it was still a dirty word in Ireland. Was I really going to pull an “Irish goodbye” now that things had got real?
Carmel McMahon, The Irish Times, December 27, 2017

The term Irish goodbye sometimes appears in popular, light-hearted discussions of of party etiquette, but it definitely has had its defenders. BuzzFeed has endorsed the tactic, but so have writers at Lifehacker and Slate. The blog Total Sorority Move went a step further in 2014 and provided a guide on how to pull off an Irish exit.

In her 2011 book Is Everyone Hanging Out Without Me? (And Other Concerns), comedian Mindy Kahling describes her variation on the Irish goodbye, which involves asking where the bathroom is or pretending to have left her car’s lights on or doors unlocked, then disappearing.

10:30PM. I’m alone in the hotel elevator. It stops at the mezzanine, where a wedding reception is in full swing. The bride gets on, alone, & immediately hides behind me. “Close the door! I’m doing an Irish goodbye!” she says, & tells me to hit the button for street level.

In the 18th century, the English called the Irish goodbye a French leave, while the French reciprocated with filer à l’anglaise, or “English leave.” Other variants are Dutch leave and ghosting, which has gone on as the go-to term for Irish-exiting relationships in the smartphone, online dating era.

I am nothing if not a pro of the Irish goodbye. #toomanyholidayparties

I personally think ghosting and the Irish goodbye are highly underrated. People get so upset about them but do you *really* want to have an awkward goodbye conversation, or would you rather fade into th

This is not meant to be a formal definition of Irish goodbye like most terms we define on Dictionary.com, but is rather an informal word summary that hopefully touches upon the key aspects of the meaning and usage of Irish goodbye that will help our users expand their word mastery.