Feedback
Previous "Latitude" vs. "Longitude" Next Quarantine vs. Isolation: Is There A Difference?

Update: March Madness voting for round one has ended! See the winners below, and go vote in round 2!

Since 1908, March Madness has been used to refer to basketball. Most notably, it describes the NCAA tournament (and all of the surrounding hype) that takes place each year. But here at Dictionary.com, we’re looking to create a little March Madness of our own: we’re hosting a tournament of slang words, and you get to decide which one takes the crown. 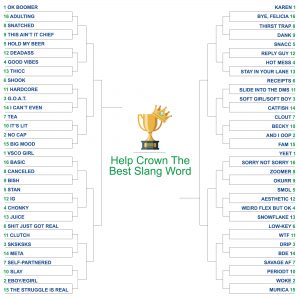 Our tournament bracket is made up of 64 new, classic, and trending slang words. From OK boomer to chonky, each of these words has the broad appeal and staying power to have earned a spot in the dictionary.

Your job is to vote for your favorite words in each round, and help us narrow the list down to the G.O.A.T. (Yes, that one’s on the bracket, too.)

So what’s it going to be? Will snowflake melt? Is it time for canceled to be canceled?

Go ahead. Kick off March Madness by filling out your bracket!

VOTING has ended, and here are the results of round one! Go vote in round two! 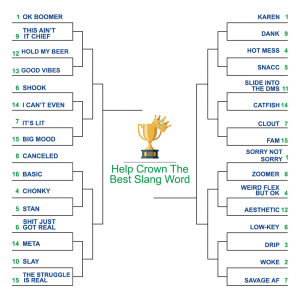 Previous "Latitude" vs. "Longitude" Next Quarantine vs. Isolation: Is There A Difference?
RELATED POSTS