What does chonky mean?

Look at that chonky boi!

In the internet slang of DoggoLingo, chonky is an affectionate way of referring to animals that are “chunky,” or slightly overweight.

Where does chonky come from? 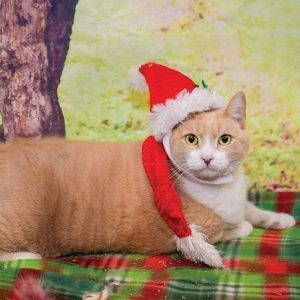 The internet slang of DoggoLingo allows us to express our extreme praise of our animal friends using cutesy misspellings, among other linguistic features. Chonk and chonky are great examples, based on the words chunk and chunky.

Chonky describes animals that are adorably round, plump, pudgy, or otherwise heavier than average. It was originally applied to fat cats, but has since praised dogs, squirrels, otters, and even some humans.

We can find chonky as a playful version of chunky in various contexts on social media in the late 2000s, especially in black internet slang. The pronunciation/spelling variation appears to add color and emphasis or reflect dialect.

Playin wit my nephew he so big and chonky lol he's handsome tho he gon fuck wit me wen he get older ima show him the ropes lol :)

Starting in 2016, the Twitter account @chonkyanimals helped bring chonky to the world of cute animal photos online by posting pics of chubby kitties.

But, chonky really takes off in DoggoLingo in August 2018, when a playful take on a domestic cat body-fat index chart, called the CHONK chart, landed on social media. The chart swapped out various weight risk levels with DoggoLingo terms, ranging from A Fine Boi to A Heckin’ Chonker to OH LAWD HE COMIN.

The chart made a, well, chonky splash after user @dreamlandtea tweeted the chart, earning a whopping 93,000 likes.

It’s Friday and I’ve been laughing at OH LAWD HE COMIN for hours pic.twitter.com/Dg1hq4MIX3

The chart further spread to Reddit in November 2018 with an entire subreddit, r/chonkers, dedicated to our lovely chonks, or chonky critters. OH LAWD HE COMIN took off as a memetic caption to pictures of chonks, sometimes even more affectionately dubbed chomnks.

my dog is deaf, blind, chonky, and losing the use of her legs but she still loves the outdoors, so my mom bought her a dog pushchair and now she’s living large
@pxlarising, February, 2019
But we challenge you to suspend all of this information and anxiety for one moment — and look at this chonky squirrel caught eating an egg roll in a tree somewhere in New York City.
Tanya Chen, BuzzFeed, January, 2019 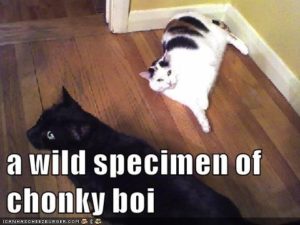 Chonk and chonky are popular on social media and fast joined the lexicon of DoggoLingo. The term, while commenting on weight, is meant positively.

Similar terms seen in DoggoLino are absolute unit and thicc, a variant of thick (for attractively full figures) that began in black slang. Be mindful that some may call out the use of thicc as cultural appropriation, as was the Monterey Bay Aquarium after their Twitter account posted about a chonky otter in December 2018. Given early evidence of chonky in black internet slang, we might well be mindful of cultural appropriation with chonky, too.

Abby is a thicc girl
What an absolute unit
She c h o n k
Look at the size of this lady
OH LAWD SHE COMIN
Another Internetism ! pic.twitter.com/s5fav2gu09

Outside cultural appropriation, be mindful that chonky has been occasionally used as an offensive blend of “chunky honky” (heavy white person) or “chink honky” (“Asian person that acts white”).

This is not meant to be a formal definition of chonky like most terms we define on Dictionary.com, but is rather an informal word summary that hopefully touches upon the key aspects of the meaning and usage of chonky that will help our users expand their word mastery.