What does doge mean?

Where does doge come from? 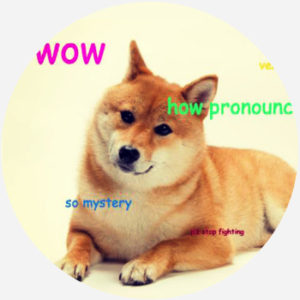 The intentional misspelling of dog as doge for comedic value goes back to 2005, when it was used in an episode of the web series Homestar Runner.

The story of the doge meme begins in February 2010, when Atsuko Sato, a Japanese kindergarten teacher, posted photos on her blog of her pet dog Kabosu, a Shiba Inu. One of these photos depicted Kabosu making a curious sidelong glance variously viewed as worried, judgmental, or confused. This specific photo is usually referenced as the doge photo.

The picture of Kabosu spread by October 2010, when Reddit user papajohn56 posted it with the caption “LMBO LOOK @ THIS FUKKEN DOGE.” Though it’s unknown if the doge used here was an intentional misspelling, a typo, or a reference to Homestar Runner, the name stuck.

The doge meme exploded from there, featured in numerous photoshopped images, usually with captions depicting the dog’s thoughts. It even spread to the point of spawning merchandise, like t-shirts and coffee mugs. Doge became a YouTube Easter egg, a cameo in a Weird Al Yankovic video, and appeared on the car of Nascar driver Josh Wise. The meme even spawned its own form of digital currency, dogecoin. The popularity of the term doge peaked around the end of 2013 and into early 2014.

On April 1, 2017, there were reports that Kabosu, the real doge, had passed away. Luckily for doge fans, this was soon proven to be an April Fools’ joke.

“we're going with doge-style 'much audience. such resilience. wow.'”
Alexander Fleming @_alexfleming_ Twitter (January 24, 2017)
“my timeline is full of doge, the dream!”
@imlostwithoutyo Twitter (May 7, 2017)
“This is Doge. He’s one of the internet’s hottest memes. You could say it’s a hot doge.”
James Lamon, “Understand the “Doge” Meme In 7 Short Steps,” BarkPost (November 7, 2013)
SEE MORE EXAMPLES

Fans of doge disagree, sometimes passionately, about how to pronounce doge. Common pronunciations are “dawj,” “dohj” and “dogue” (like vogue), but others like “doggy” also exist.

The doge meme displays a photo of a Shiba Inu—usually the sidelong glance photo of Kabosu, but not always—surrounded by a series of short captions in colorful, lowercase Comic Sans font, meant to express the dog’s inner monologue. These captions, which have come to be called doge-speak, tend to be short, choppy, and with deliberately poor grammar. They are often exclamations of surprise or enjoyment, meant to interpret the frenzied and excited manner of many real dogs. Frequently misused in the captions are adjectives or adverbs like “such,” “many,” “so,” “much,” and “very” in expressions like “many happy” or “very guitar.”

The doge meme is also used for humor and social commentary. In one meme, a doge is photoshopped to look like a delicious bagel, captioned in doge-speak: “wow such taste / such chocolate / so yum / such sweet / wow / don’t eat me / many tastes / wow many cinnamons / am really doge / only pretend to be bagel.” Another meme features a photoshopped picture of Russian President Vladimir Putin hugging doge, with the captions: “much strong / such leader / wow / very politics / so snowden.”

The popularity of the doge meme has led to popular usage of the term doge to refer to dogs in general, particularly when they do things considered weird or funny.

The doge meme is not to be confused with the historical Doge, the title of the chief magistrate of Venice from the 600–1700s and the ruler of Genoa from the 1300-1700s.

This is not meant to be a formal definition of doge like most terms we define on Dictionary.com, but is rather an informal word summary that hopefully touches upon the key aspects of the meaning and usage of doge that will help our users expand their word mastery.