or gwap or gwop [gwop]

What does guap mean?

Guap is slang for a lot of money—cash money. Unlike some of the other many slang terms for money (e.g., rack or milli), guap is an unspecified amount. It’s just a lot of dough, moolah, bones.

Where does guap come from? 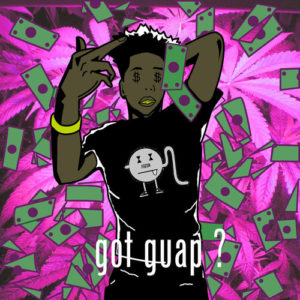 While its exact origins aren’t certain, the term guap may be shortened from the Spanish guapo or guapa, meaning “handsome” or “pretty.” It may have originated from drug-dealing slang in Harlem, New York, to refer to a “handsome sum” or “pretty penny” of money earned. Another theory suggests gwop, an acronym for George Washington On Paper.

And now, get ready for some music …

According to The Right Rhymes hip-hop dictionary, the first time guap appeared in a rap song was in Nelly’s 2004 “Grand Hang Out.” This isn’t about a big group of friends kicking back in style but having a thousand dollars dangling out of his pocket. In it, Nelly raps: “Fuck a handout, I been gettin guap since way back.”

Rapper Cardi B, who soundtracked much of the popular music in summer 2018, hooked her single “Bickenhead” that year with “Guap, guap get some chicken / guap guap get some bread.” Maybe she wanted some guac? No, chicken and bread are also some tasty slang terms for money, like cheddar and clams.

This is why I'm hot, shorty see the drop / Asked me what I paid and I say 'Yeah, I paid a guap.'
Mims, "This is Why I'm Hot" (song), 2007
while all of y'all be held back by your controlling and clingy significant others, I'm out making guap and livin large with no one limiting my possibilities. hah
@meghan_braj18, May, 2018

Guap is black and hip-hop slang, used by folks boasting they have—or lamenting that they need—that sweet guap.

According to my watch, it’s time to get guap

#ChigumbaChallenge. Set your priorities straight! Get an LLB. Be a high court judge. Make basic b*#%s nervous. Ridiculing an educated woman with Guap 🤑 for makeup is nonsense!!! She could hold the country at ransom at will!!!! pic.twitter.com/EZUXaB4wIz

As hip-hop is ever the vehicle for popular culture, guap is sometimes used in mainstream slang, especially by people trying to look cool or edgy in talking about large sums of money.

In hip-hop culture, guap appears to be more common among East Coast and Midwest rappers. Listen for knot, or a “wad of bills” in West Coast rap. It’s usually used as a mass noun (e.g., some guap) as opposed to a count noun (e.g., a guap).

This is not meant to be a formal definition of guap like most terms we define on Dictionary.com, but is rather an informal word summary that hopefully touches upon the key aspects of the meaning and usage of guap that will help our users expand their word mastery.