Ka-ching! This emoji is all about the green: a typical round emoji face with dollar signs for eyes and a green bank note for a tongue.

Social-media posts using the money mouth face emoji are usually celebrating or expressing some wishful thinking around money. It's also used in posts about jobs and sometimes represents the idea of "The Good Life." But, we all know money can be a source of frustration, too. Maybe a frowning money mouth face is in the works ...

Where does 🤑 Money Mouth Face emoji come from? 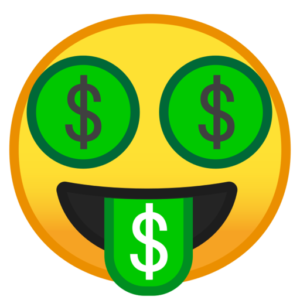 There are a number of emoji available to express ideas related to all things money in texting and social media. The classic money bag emoji is nice, and the straightforward bank note emoji gets the job done, too.

Most of the emoji appeared around 2015, which seems like a long wait, considering how popular they are.

And then, there’s the money mouth face emoji which was approved as part of Unicode 8.0 in 2015 as well and added to Emoji 1.0 in 2015. This emoji makes light of the money-factor, as the smiley face is literally spewing money from its mouth. We’re not really sure of the intent here … but we’re guessing people needed an emoji that showed a love of wealth or an extreme involvement in money.

People using the money mouth face emoji are usually looking for a way to express a love or appreciation of money … or a consuming desire for money. Sometimes, it points to a way of life improvement and is often used in reference to the job market, money-making, banking, and cryptocurrency.

The median starting salary for a CMO in the US will be $164,000 in 2019, says The Creative Group. More details on Marketing salaries here 🤑 > 2019 Salary Guide: Pay Forecasts for Marketing, Advertising, and PR Positions https://t.co/ppmCjD5IGJ pic.twitter.com/KYeBq2fgaE

I prayed for you since the first day you started your new journey🙌🏽 I can’t express how proud I am of you. I knew you would do great tho as usual 💪🏽. Congratulations sissssss I love youuuuu👯‍♀️💕🤑 @_suchashowoff_